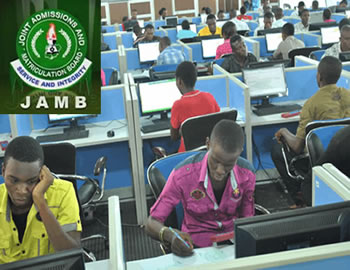 The Joint Admissions and Matriculation Board (JAMB) says it is monitoring the ongoing Unified Tertiary Matriculation Examination (UTME), through its central Closed-Circuit Television (CCTV) cameras in Abuja.

Its Niger Coordinator, Mr Muhammed Ibrahim, told the News Agency of Nigeria (NAN) on Saturday in Minna that all the examination centres were linked to the CCTV.

“Our staff, candidates and supervisors in all examination centres are being watched and recorded; it is part of our efforts to reduce or eliminate malpractices in the conduct of the test,” he said.

The Coordinator said that 32, 000 candidates registered for the examination in Niger and were writing the test in 14  centres.

He said that the exercise was smooth in many centres except at Jumai Aliyu Babangida Development Centre, Minna where a system failure was recorded.

“The issue lingered a bit, so we immediately moved the candidates to the zonal office to write the examination,” he said.

He said that the examination, which started on Saturday, would end on Wednesday, and promised a hitch-free exercise.

A candidate, Fatima Mustapha, who spoke to NAN in Minna, said that the process was smooth, and particularly commended JAMB for the speed of the bio-metric verification of candidates before being admitted into the hall.

Mr Saidu Abubakar, a personnel of the Nigeria Security and Civil Defence Corps, who also spoke with NAN, commended the candidates for being orderly.

“The candidates have been very orderly. There are no hitches,” he said.

JAMB Registrar Ishaq Oloyede said recently that 1.736 million candidates registered for the 2017 UTME, signifying a sharp rise in people seeking university admission when compared with the 1,272,284 candidates that wrote the test in 2016.

Leadership with integrity rare to come by in Nigeria —CAN President