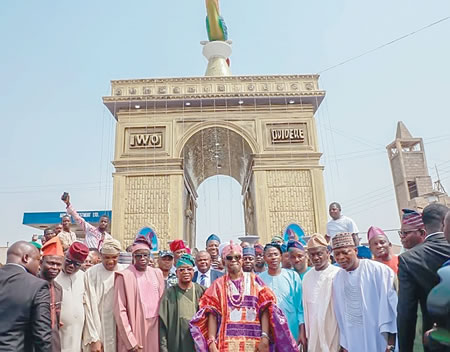 A statue of a standing soldier used to be on the spot and for many years it was an important feature of the ancient Iwo town. In October 2018, however, the Oluwo of Iwo, Oba AbdulRasheed Akanbi, passed through that roundabout and felt the need to change the face of the environment.

He ordered the removal of the statue and initiated the construction of a replica of the Arc de Triomphe in Paris, France. A few weeks to the end of 2019, the arc, now named Telu Square, had reached completion stage only awaiting unveiling.

A good number of Iwo indigenes who returned home for the New Year festivities could not hide their emotions seeing the new night life Telu Square had brought to the market axis. The brightness illuminated by string lights with which the monument was dressed was an allure, giving Iwo the same attractive image travellers saw in Lagos, Ibadan and other major cities during the yuletide.

The Oluwo himself, it was learnt, drove to that axis on Christmas night to also relish the new aesthetics he imported into his town. It was in that ecstatic mood he was when he welcomed the Governor of Osun State, Gboyega Oyetola, into his palace on January 16, 2020, the day he clocked four years on the throne. The governor was in the palace as the special guest of the Oluwo to unveil the arch.

In undisguised demonstration of his appreciation for the creativity Oba Akanbi has brought to the throne, Governor Oyetola offered to trek from the palace to the venue of the unveiling where invited guests and people of the town were already patiently waiting.

Accompanied by other top government functionaries, the governor acknowledged the appreciative guests, including the former Secretary to Osun State Government, Moshood Adeoti.

He enjoined the people of Iwo to support the vision of Oba Akanbi to transform the town to a city they would all be proud of.  The governor also urged the people to support his administration, promising to honour his campaign promises.

The Oluwo used the occasion to present N100,000 to each beneficiary of his empowerment scheme. The lucky ones were called one after the other to receive their facility which Governor Oyetola presented to them amidst applause.

“This empowerment scheme is just a tip of the iceberg in my resolve to reduce poverty with my scant resources. When I ascended the throne four years ago, I made it known that I would always work to complement the efforts of government because I am exposed enough to know that the workload on government is too enormous,” the Oluwo said.

News of the unveiling was greeted with complimentary remarks from indigenes of Iwo home and in the diaspora. To Reverend Wale Dada, a Lagos-based son of Iwo, the Telu Square is a welcome development and fulfillment of his long dream of a facelift for his town to make it a centre of attraction to outsiders.

An Islamic scholar, Lukman Badru, was full of gratitude to God for the reign of Oba Akanbi, saying the arch symbolises the Oluwo and vice versa. Badru explained further that the arch stood for identity, modernity, beauty, innovation, progress, foresight and success.

“The royal father has been able to write his name in the book of honour and his indelible mark will remain. At the initial stage of its construction, many people took to the social media lambasting him for the creativity under the guise of removing ‘Soja Idumota’ that has no bearing with Iwoland, but some of us who believe in him remained unruffled and it has become a success story now. God bless him,” he said.

Employment policies are key to address challenge of migration —ILO