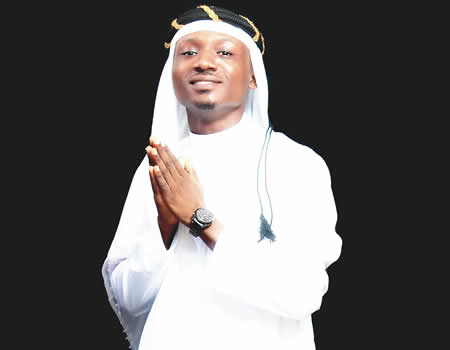 Uthman Mubarak Abiola popularly known as Almubarak Kewuyemi, is an Islamic Afro-Pop singer, in this interview with NIYI OYEDEJI, speaks on how music can be harnessed into national development, just as he recounts his sojourn in the music industry.

Music is a growing industry in Nigeria. How has this challenged you?

Doing music in your chosen line, what informed your choice?

First of all, hip-hop is the genre of the young generation irrespective of religion, ethnicity or belief and the local way of singing Islamic music is no more appealing to them. In order to pass message of Islam through music, I thought it a wise idea to use the medium they love most which is hip-hop. Another thing is that the local way of singing Islamic music has been technically and qualitatively stagnant for years, which may likely go into extinction in no time, if care is not taken.

The issue of acceptability is another factor,.How has it been ?

Well Alhamdulilah, majority of Muslims love my brand and that is what keeps me pushing, they always want more because they have been thirsty for something like this for a very long time. Muslims accepted it as a great modernisation. Of course, not everybody will accept you, but I believe people that those who do not like my brand do not listen to music at all

Tell us about your fans. How supportive have they been?

You know it’s a new genre and it’s quite technical for most people; but my fans have been supportive in their own way.

How do you think music in Nigeria can be better?

By doing good music and following due processes. If the government can also support the industry, it will really help. A lot of talents are wasting away because there is little or no support for them

Do you think the quality of music in Nigeria is dropping?

I don’t think so. Quality of music in Nigeria has really increased significantly. People are making quality sound with great content

Do you agree that the music industry is not tapped enough for national development?

Yes I agree. Musicians shouldn’t only be useful during election campaign for the politicians. The government should use music to pass messages of hope to citizens and if due support is given by the government, it will create more employment opportunities

Going forward, how do you plan to continue to use Afropop to redefine Islamic music?

Islamic Afropop is part of the future of Islamic music and, Insha Allah, I’ve been trying my best to make sure good Islamic music maintains its relevance. The old way is going into extinction already due to lack of innovation. I have great plans that will be unraveled as time goes on Insha Allah.

Tell us about your most accepted tracks

‘Dunmi Ninu’, Kizz Daniel’s ‘Woju’ cover, a prayer song that I put all my feelings into the lyrics. It’s been five years since I dropped the song online and it was widely accepted. The song gave me a fan base. It’s been then that most Nigerian Muslims got to know that there’s something called Islamic Afropop, and by the grace of God, it’s still trending; it is evergreen.

I was ghetto-bred, but now a filmmaker and peace ambassador —Okoduwa