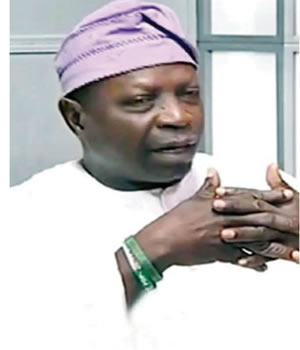 Dr Tokunbo Pearse is one of the chairmanship candidates in the Lagos State chapter of the Peoples Democratic Party (PDP). In this interview by BOLA BADMUS, he speaks on the problems confronting the party and his resolve to turn things around if elected into office.

WHY are you putting yourself forward for the post of the chairman of the PDP in Lagos State, a position that has become turbulent over time?

I just feel that I can be a voice of reconciliation regarding that very turbulence because what has been responsible for the disagreement over the years is the impression that the chairmen we have had so far were imposed by some leaders. I have been cordial with all the leaders and I do not have the image of a person that somebody is going to impose on people. So, I will work with everybody at the local, state, zonal and national levels. I have worked with most of them before and they believe I am independent enough to be fair to everybody. Therefore, I will be able to unite the party effectively and get ready for electoral victories.

The crisis in the party has been a protracted one, from inception to the time of the incumbent chairman. What will you do differently to bring peace to the party?

There is the impression that the chairman of the party belongs to somebody. The problem in the PDP is that in any Republican, vibrant party, people talk, people fight, people express themselves. If you are a chairman that is perceived to be overbearing, there will be problems.

It is the primary election that usually creates a problem in Lagos PDP. When we have our primaries, you find different leaders supporting different persons for the governorship position. And when party members have the impression that the primaries have been rigged in favour of an aspirant, there is acrimony and then we go into the general election as a divided house.

I will tell you what happened in the build-up to the 2015 general election. I was running for the governorship position but about six months to the primaries, we were told that Jimi Agbaje was in the race. Agbaje had just come into the party and within four-five months, he won the primaries. The impression was that the primaries were rigged for him. All supporters of his opponents that lost out in the primaries decided not to support Agbaje’s governorship ambition. And the main reason he lost that election was that his party was not with him. As a faction of the party, we didn’t work with him at all. We abandoned him and it affected our chances to produce the governor and by extension, it affected our chances to win the presidency.

If we can unite the people – as I will do, by God’s grace – and be fair, the party will come back stronger. I will give you example of what may happen if I become the chairman. A lot of people outside are talking; they are saying that Jandol group and other groups within the All Progressives Congress (APC) are about to dump the party and we suspect they want to come into the PDP. If I become the state chairman, I will tell them, ‘You have to come into the party now; you have to become bona fide, card-carrying members of the party’. But if they wait until six months before election, we will not allow them to join the party because it will be too close to the election. They must give themselves time so that people will know them in the party. If they participate in party activities, we can evaluate them properly otherwise for him to win the primaries, the exercise would have to be rigged for him and I will not do any rigging for anybody.

I will not allow any leader to rig election for anybody so that we will have a fair house after the general election. We will not allow our people to start fighting after every primary. That is what ruined us.

There is the impression that the PDP is dead in Lagos, given the fact that there is a vibrant APC led by Senator Bola Tinubu and the party has been in power for over 20 years, since the return of the democratic dispensation. How would you react to this?

Lagos is the epicenter of the APC and that is why the PDP, which is the opposition party in the state, has been marginalised in the state. That is one reason it appears the PDP is dead in Lagos State. But if truly the PDP is dead in Lagos, you will not see the kind of enthusiasm you saw in our ward and local government congresses. Even the fighting, all the noise, is part of the process in a democracy. It shows that the party is alive and well and people are eager; they want to hold offices.

On the issue of the state chairman for the Lagos PDP, there are about six of us running for the position and that tells you that people are interested and eager. The party is not dead. If you are not in power, it is difficult to make so much noise, especially with this administration. It is a very vindictive administration. If you make a mistake, they will blackmail you. It is either you join the APC or you perish. A lot of our leaders have gone to the APC and the reason why some of them did that was because they are hiding something. So, it is wrong to say that the party is dead. The PDP appears weak in Lagos because of the power of the APC but 2023 is an opportunity for the Lagos PDP to reinvigorate and re-establish itself.

The inability of the PDP to perform well in elections in Lagos has been attributed to the existence of moles in the party who divulge the party’s strategy to the ruling party. If you emerge as the chairman of the party, how will you deal with this challenge?

There will be a difference regarding the issue of moles or double agents if I become the chairman. The reason those moles have been effective is because they were in positions of authority within the party. If the state chairman of a party is associating with Ayo Fayose who has declared publicly that his leader is Asiwaju Bola Tinubu, then you wonder where the allegiance of such chairman lies. If you have that, then you have a problem in the party. There is so much weakness and confusion because we sabotage ourselves. If I become the state chairman of the PDP, that will stop because my transparency will reflect throughout the party.

It is easy to know a mole. Whether they are paid or not, I don’t know, but sometimes you can tell from their actions. If someone is in the PDP and supporting the APC, then the person is not in the PDP. We will not wait until election time before knowing those who are saboteurs. You will see them leaving the party or we will make them redundant in the party. With my transparency and insistence on zero tolerance for double agents, anti-party activities, the party will come alive again.

How do you plan on making the party more active in Lagos State?

You cannot have a party that is redundant all year; people must feel involved; there must be activities in the party. One of the first things I will do is to solicit for one billion naira for the party in the state to get a building of its own as secretariat. In virtually every other state of the federation, the PDP secretariat is owned by the PDP. We are going to run all regular activities. One of the first things I will do when I get into office as chairman, either in January or February, is to coordinate a national conference on restructuring, something I did at the University of Lagos about two years ago. Party leaders and members all over the country will be invited and we are going to embark on a rigorous membership drive.

I was the chairman for the zonal congress in the South-South and I realised that South-South governors and leaders have sympathy, interest, in Lagos. Makinde is ready to help us and he will get other governors to assist. I intend to take advantage of that relationship to get support, financial and otherwise, for Lagos State PDP.

Chief Olabode George is a strong force in Lagos PDP. What is the relationship between you and him?

I have a cordial relationship with Chief George. He is my elder brother. We are very close and he has said that he would not publicly endorse anybody and that everybody should go for the congress. When I went to inform him that I was running for chairmanship, he said, ‘You have my blessing. If you are the best, you will know. Let us go for election’.

What role do you think the PDP at the national level needs to play to ensure that the party wins governorship seat in Lagos State in 2023?

The national body has always been ready to help us in Lagos. Senator Bukola Saraki (former Senate president) came here several times to try to reconcile our leaders. He came with five former governors. It was a high-powered delegation. They are very interested in Lagos but Lagos cannot move forward if the team in Lagos does not help itself. The national body can only help a Lagos PDP that helps itself.

My running for the state chairmanship is to liberate the party. If I don’t win, I will go home and sleep peacefully. To me, this is a major challenge. I am contesting out of the goodness of my heart. I know that once you have a state chairman than can unite the party, the national body will now come and the support from the national body has always been there. When we contested for the Lagos East senatorial bye election with Babatunde Gbadamosi as our candidate, Governor Seyi Makinde was ready to assist and other PDP governors from the North and the South were ready to assist.

By the way, we have three House of Representatives members presently, so it is clear that we are not dead. We are still here but we need to be vibrant. We should work together with all these leaders. The national body has always assisted us to win elections but what is going on in the state chapter of the party does not allow their investments to yield fruits.

The subject I want to improve on this session