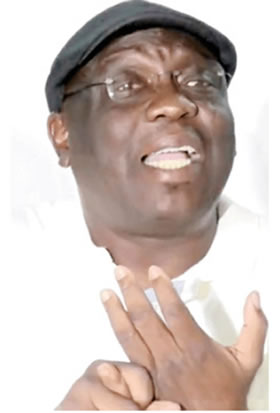 Fouad Oki is a former vice chairman of the ruling All Progressives Congress (APC) in Lagos State. He has served as the campaign coordinator for former governors Babatunde Fashola and Akinwunmi Ambode. Oki, who is gunning for the chairmanship of the party, in this interview with some journalists, including Tribune’s BOLA BADMUS, speaks on the state of the Lagos APC and his plans for the party.

YOU are a former factional chairman of the Lagos APC. Why are you vying for the position of the state chairman?

Factionalisation will exist as long as there is no equity, justice and fairness in the system. But presently, how can I lead a faction against non-starters? I lead people who are desirous of playing their roles in our party because they see politics as community service. I lead people who seek justice and are clamouring for equity and fair play. So, I lead a tendency, not a faction. How many of them were in the kitchen when we were cooking? I lead a vibrant tendency with young, upwardly mobile Nigerians who want to play a role in the development of our nation.

But your movement or tendency is seen to be in competition with the establishment in Lagos and another group called Lagos4Lagos.

I have been agitating for equality, justice and fairness for years. I have been agitating, begging those who care to listen that our party is going down the hill. Are you aware that the Lagos4Lagos movement has a destination? The destination is to seek power. My destination is to have a party that works for all. Where is the comparison? You have two different tendencies with different aspirations. Let’s be fair; let’s call it what it is. Are there people that are desirous of holding on to the reign of political power in Lagos? Yes. You want to call them the establishment? No. Over 80 per cent of them are non-starters who do not have records of political achievements.

Don’t mix it up, there are politics and political management and administration and there are politics and governance. The fact that you fraudulently found your way into some level of government does not make you an active politician. Politics is a vocation for me and I am very active in its participation and I have come a long way.  For us to help Nigerians to understand the issue, let us properly situate this thing.

Lagos4Lagos is doing well, no doubt, but their destination is to seek governorship power. Fouad Oki leading the APC democrats has just one destination: to be given an opportunity to address the ills that are besetting our party. What are the ills? Injustice, unfairness and lack of equity.

It will interest you that the highest vote ever scored by any political party in Lagos State was in 2011 by the defunct ACN, I mean, the re-election of Babatunde Fashola as governor in 2011 with close to 1.6 million votes. Since then, our party has not recorded such a number of votes in any general election in Lagos State. Although we have been winning, have we ever crossed the one million mark? In the 2019 election, with over six million voters, all we could garner was less than 600,000 votes. You know why this was so? Our traditional voters are no more interested in us. Our ways and means are giving them anxiety. They are looking at us as people who cannot be trusted with fulfillment of promises.

Our party members are crying all over the place, not willing to mobilise people to vote for our party again. They are disenchanted because there is no equity in the system. You have situations where members work for the party only to be discarded when our members seek offices. You know what happened in the last local government election; where chairmen were elected with 5,000 votes, councillors with a little over 500 votes.

Right now, the situation is sad and worrisome. As we are talking, some people are saying ‘leave the party, let us go and bring a chairman from another senatorial district, our people will vote for us’.

Charity begins at home. When your roof is leaking, you say let us be cosmetic. Is that the answer? No. We need a unifier, a bridge builder. The majority of the party members believe that answer is in harmonising. You have people in the party holding strong views against your ways and you are not bothered. You will agree with me that our party is not united in Lagos State today. Our party has never been this divided.

Have you made efforts to meet the leaders and tell them your grievances?

I don’t have grievances. I tell everyone that cares to listen that our problem today is about our unity. But for my efforts and some others’, we would not have had elections at the local government level a couple of months ago. I made an open appeal that we should make this happen. Let me give kudos to the governor of Lagos State particularly. I think he listens. Let me also thank the leadership of LASIEC. Even though they did not do well at the election, let us acknowledge their effort in that regard. I have written several open letters of appeal, the last one being about seventeen pages explaining all of these and the way to go about these issues.

Today, our party in Lagos State is the least popular party. Danger is looming and it is around the corner. INEC just told us a couple of days ago that they would be adopting the bimodal system for the 2023 general election, meaning that they are not going to rely on one-step verification. That means that what they are going to do now is to say that you will use your thumbprint as well as your facial recognition – photo. It means that fraudulent acts will not be possible in 2023. We must make our voters believe in us for that to be possible. We must have a unifier, a bridge builder. Unfortunately, there is graveyard silence in our party.

Some days ago, I was trying to reach out to delegates. I put them on a platform but they were directed by some people to remove themselves from the platform. Who is losing? Me? I have done my bit.

What are your chances of clinching the position of the chairman of the party, with the incumbent said to be enjoying the backing of some powerful forces?

I would not have started if my chances were not bright. I don’t have powerful forces except party members. But let me say that when people refuse to do the right thing by accepting the truth, there will be problem. I can say that what we have is graveyard silence but the people know where their hearts are.

Are you ready to seek alliance with other groups towards achieving your ambition?

You have to expose yourself with delegates to that congress and you reach out to party members. For instance, this interview is a way of explaining to party members about the state of affairs and the way out. Also, this is what I am doing to lead the party and I have my manifesto.

It is alleged that the nomination forms are being hoarded. Have you bought your form?

Yes, I have. This is what they are doing in Lagos. They are hurting themselves because the national leadership has explained the process of buying form, which is by making payment at any bank and subjecting your teller to verification. After that, you can pick your form from anywhere in Nigeria. It is a generic form; it is not custom-made for any state.

During the ward congresses, the national leadership sent some officials to come and sell forms in Lagos. Those officials were hijacked at the party’s state secretariat. Somebody bought all the forms running into hundreds of millions, just because you don’t want the Fouad Oki tendency to buy forms. You have only made the national secretariat richer. So, we went to the national secretariat with our evidence of payment. At the local government congresses, it is the same; they hijacked the person sent here and bought all the forms.

The man that was sent here was hijacked by a prominent member of the party. At the appropriate time, we will mention the name of the party member who did that. They don’t want us to buy forms, unknown to them that I was at the national secretariat to buy our forms. It is unfortunate, when you don’t allow a level playing field, democracy would not thrive; which is what they are doing. Whether you like it or not, they need the Fouad Oki tendency in our party more than our party needs them.

What is your relationship with Lagos4Lagos political group?

The leader of Lagos4Lagos is my brother. I have a cordial relationship with him. I am not a member of Lagos4Lagos and I have never been a member. But because of the relationship, I have had to sit down with him and give my opinion and suggestions on what he does, even when it was the Eko-Ebile group. I lead a tendency. With my years of experience I can’t subject that to any new group.

Do you support what they are doing?

I spoke with him some days ago when I saw some dirty politics being played by some people in the party. I called him and said is it true that you claimed to have the support of this traditional ruler? For me, it is about our party and not about individuals, and he explained something to me which shows that some people are just desperate. Those who want to be chairman of the party should not resort to telling lies. Those with aspirations should not tell lies. He is my baby brother. I am not a member of Lagos4Lagos.

Have the controversies that led to parallel congresses been resolved by the appeal committee of the party?

We forwarded a position paper to the group and we also expressed our reservations. No state chapter appeal has been held so far for reasons best known to the national headquarters. They have their plans because they believe there is the need to manage this crisis. It is unfortunate that some people continue to do the same thing over and over with impunity.

My wife stole money meant for my visa to Saudi Arabia, poured pepper into my eyes —Husband