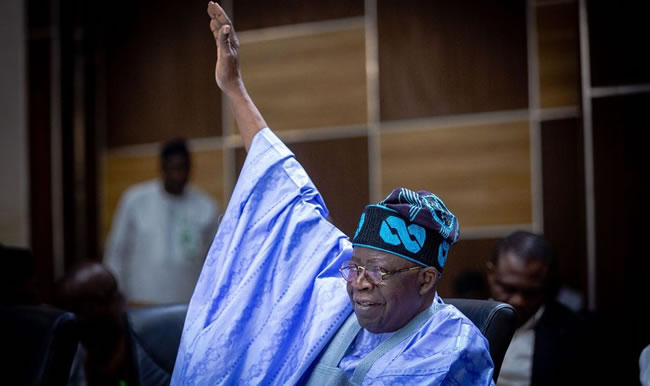 Two-term Lagos State Governor and Presidential candidate of the All Progressives Congress (APC),  Senator Bola Ahmed Tinubu,  has said he is physically fit for the rigour of the Presidency.

Tinubu restated his fitness at the weekend in a tweet on his handle, in an apparent reference to an insinuation that he travelled to the United Kingdom to attend to an alleged health challenge.

In attendance among other candidates were Atiku Abubakar, Peter Obi and Rabiu Kwankawso, of the People’s Democratic Party, the Labour Party and the New Nigerian People’s Party, respectively.

At the occasion which was organized by the National Peace Committee led by former military Head of State, Abdulsalam Abubakar, (retd), Tinubu was represented by his running mate, Senator Kashim Shettima.

Refuting claim of ill health, the APC presidential candidate however reassured Nigerians:”Many have said I have died; others claim I have withdrawn from the presidential campaign.

“This is the reality: I am strong, I am healthy and I am READY to serve Nigerians from Day One.”

Checks revealed that on Friday, the Director of Media and Publicity, APC Presidential Campaign Council, Bayo Onanuga, said his principal was hale and hearty.

Onanuga said his clarification became necessary on the heels of a viral picture which portrayed the APC presidential candidate as facing health challenges and recuperating in an undisclosed hospital in the United Kingdom.

Onanuga in a post on his Facebook wall dismissed the picture of ailing Tinubu as ” another handiwork of purveyors of deep fake. Whoever is behind this malicious falsehood will face the judgment of God at the right time. The man in the photo does not look like Asiwaju, except for his baldness. The man is fatter. Tinubu is slimmer. “

“Look at the frame of his glasses. it is certainly not Tinubu’s trademark frame.

“Let me assure Nigerians who genuinely want to know Tinubu’s whereabouts. He is in London, in his house.

“Tinubu left Nigeria on Saturday night for a short break and in readiness for what will certainly be a gruelling campaign. I saw him, spoke with him two hours before he left. He was hale and hearty. He was not ill. He didn’t go to treat any ailment.”

Onanuga appealed to Nigerians to stop spreading what he called “rumours about Tinubu.”

“We spoke today at about 2 pm (Friday)  and he told me how his one week retreat has not made any difference. He was still working like in Nigeria. Today, he still burnt his candle till 4.30 a.m.. Nigerians should stop spreading rumours about Tinubu, who by the grace of God and fellow Nigerians, will be elected our leader next February. We should learn from the divine fate of the man who wished Tinubu dead.”