• We don't have teargas to disperse protesters who destroyed our station, says Inspector 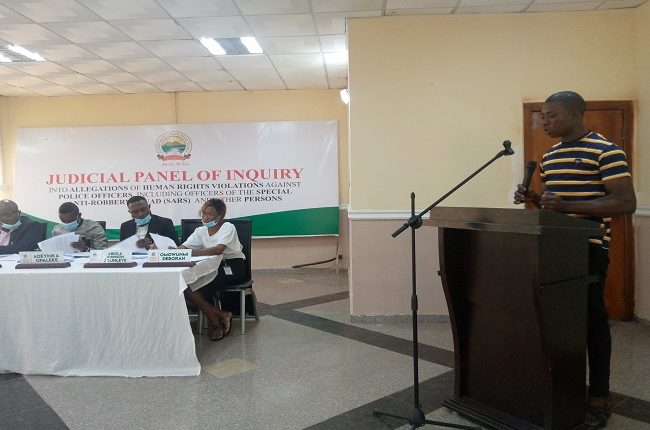 A police officer serving in Ekiti state, Seargent Kolawole Adesina on Tuesday told the state judicial panel of inquiry on how his vehicle was damaged by angry protesters during the #EndSARS demonstration in the state.

Adesina who is an officer with the Afao Divisional Police station in Ikere-Ekiti, Ikere local government area of the state, however shocked members of the panel and observers that the papers of the damaged golf three-vehicle he submitted had since expired since April 2013 with no effort to renew it.

The chairman of the panel, Justice Cornelius Akintayo (retd) who asked the complainant as law Officer driving a vehicle that the documents expired over seven years ago, he replied, ” I know it is not proper for me to have expired documents for my vehicles especially as a police officer.”

He explained that he escaped with his colleagues through the fence when the protesters stormed the police station in Ikere-Ekiti, adding that his vehicle with number plate AG401MOE was badly damaged and destroyed with the stereo and battery carted away.

He regretted that since the attack on the station, officers have nowhere to resume for their duties of policing in the community, saying they have been reporting at the state headquarters in Ado-Ekiti, the state capital.

Adesina who said the cost of damage in his vehicle would amount to about N400,000, pleaded with the panel to consider him in the area of monetary compensation.

He said, ” On the day of the protest on October 20th, 2020, the angry protesters protesting #EndSARS stormed our station in their large number and started pelting us with stones. We have to escape through the fence to save our lives but my vehicle was damaged and the stereo and battery were taken away.

” I want compensation from this honourable panel.”

ALSO READ: 7 Reasons to Include Video in Your Digital Marketing Strategy

The chairman adjourned the matter to Thursday 19th October 2020 for the panel’s recommendation on the damaged vehicle.

Also, another senior police officer who appeared before the panel over his burnt car, Inspector Yakubu Aminu said there was no teargas present at the station to disperse the angry protesters who burnt down the divisional police headquarters in Ikere-Ekiti.

Aminu noted that the only option left for the officers on duty was for them to run for their lives, saying the officers were helpless during the attack by the hoodlums.

When asked on the use of minimum force to stop the hoodlums from burning the station, the inspector said, ” there was no teargas in the station as of the time the protesters came around, so there is nothing we could do than to run for our lives.

” The protesters were so many that we could not do anything and we can’t start shooting because how many people do you want to kill?

The Inspector who explained that his golf three-vehicle was burnt to ashes in the premises of the station said he bought the car in 2012 with N550,000 and that he wants compensation for the loss.

On why the papers of the vehicle submitted alongside his petition have all expired since 2013, Inspector Aminu said, ” it is because we don’t normally go out from the station in most times.”

Justice Akintayo appealed to the petitioners and interested lawyers to see the matters before the panel as cases of fundamental human rights and hence cases should be given utmost priorities considering the six-month timeline of the judicial panel of inquiry.

Justice Akintayo adjourned the matter till Thursday 12th October for the continuation of hearing on other petitions submitted members of the public on human rights abuses against the disbanded Special Anti-Robbery Squad (SARS) and other law enforcement agencies.

Sanwo-Olu proposes scrapping of pension for Tinubu, Fashola, Ambode, others

Court arraigns six over destruction of property in Ekiti