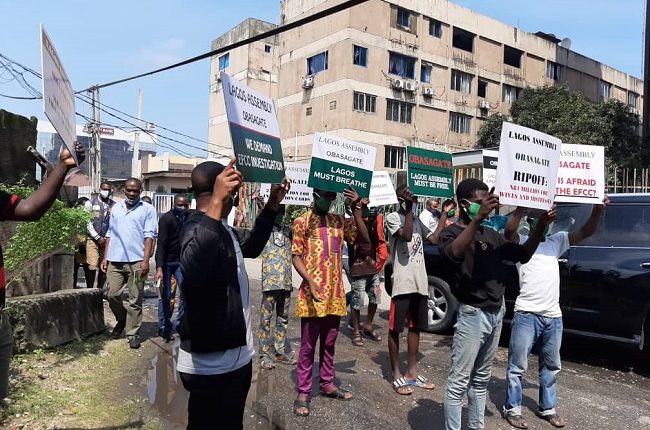 Civil Society Network Against Corruption (CISNAC) on Tuesday stormed the Lagos office of the Economic and Financial Crimes Commission (EFCC) in Ikoyi area of the state in protest, calling on the commission to commence probe on corruption allegations against the speaker, Lagos State House of Assembly, Hon. Mudashiru Ajayi Obasa.

CISNAC, while demanding that EFCC should wade into the litany of allegations of corruption levelled against the speaker to unravel them, including the alleged purchase of a bulletproof car at a market price of less than N100million but which was inflated to N300million, the unilateral purchase of 40 cars for members of the House with no prior discussion with them nor official approval of the House, among others, expressed dissatisfaction with the report by the committee of the House which sat and exonerated the leadership.

They declared that it was wrong for him to have set up such a committee in the matter of allegations directed at him, declaring that Hon. Obasa cannot be a judge in his own case.

Odugbemi, while submitting the petition on the corruption allegations signed by CISNAC chairman, Olanrewaju Suraju to the Lagos Zonal Head of EFCC, ACP Mohammed Rabo, however, said the group was not judging Obasa as guilty yet, but quickly noted that “everywhere is awash with a litany of allegations that the speaker has embezzled, and squandered money belonging to the public.”

“We are here to submit a catalogue of allegations against the Speaker, Lagos State House of Assembly to you, being the one in charge of addressing issues of corruption allegations in the country.

“In the State House of Assembly, there are attempts to sweep the allegations under the carpet by setting up a panel, they cannot be a judge in their own case,” Odugbemi said.

Rabo, while receiving the 4-page petition addressed to the EFCC Acting Chairman, Malam Ibrahim Magu, assured that the commission would do a thorough investigation of the allegations contained in the documents, assuring further that the body does not discriminate in carrying out its duty.

“I can assure you that EFCC would give it (petition) utmost attention,” he said.

Speaking with newsmen thereafter, CISNAC project manager, Odugbemi, said the group took the step to petition the EFCC on the allegations rocking the Lagos State House of Assembly because as civil society group, it could not stand aloof, just as he insisted that the group was not passing a verdict of guilt on the speaker.

He said Speaker Obasa should have allowed the EFCC to look into the allegations against him rather than setting up a panel of the House to clear him of all those, describing the panel as a “kangaroo committee.”

“The EFCC is the body that can do this, that is looking into the allegations so that Nigerians can know what has happened to their money.