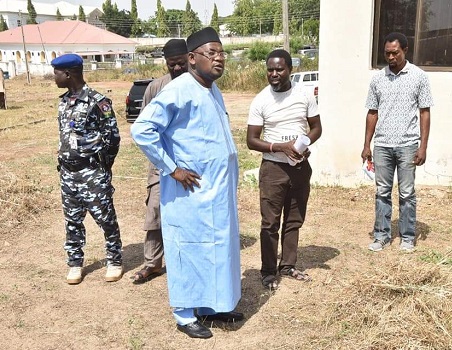 Abubakar Njodi who made his feelings known while on an inspection visit to the complex on Friday challenged the contractor handling the project to speed up work and deliver the project as scheduled or be sanctioned.

According to the SSG, “You know we just swore in Commissioners and Special Advisers and to hit the ground running, Governor Inuwa Yahaya has since awarded the contract for the renovation of the office complex so as to provide a conducive working environment for the advisers”.

The SSG further said that it is the hallmark of the present administration of Governor Inuwa Yahaya to see to it that all awarded contracts are delivered on schedule and therefore call on the contractor to justified the confidence the state government has reposed on him.

Abubakar Njodi also visited the Due Process office where he assured staff of the Office of the APC led administration’s commitment to provide a conducive working environment for all its officeholders and other public servants for maximum productivity output.