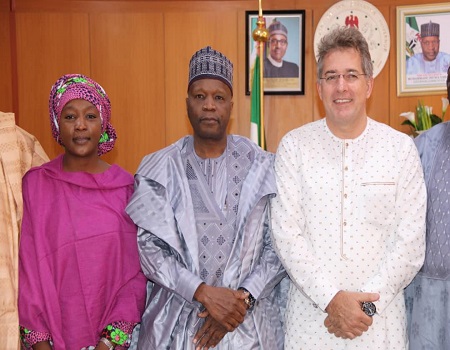 Inuwa Yahaya made the expression on Friday when he played host to a World Bank/ Nigeria States Health Investment Project, (NSHP) who are on an implementation support mission to the state.

While receiving the team in his office at the Government House, Gombe, the Governor said that his administration is determined to sustain the gains achieved by the project, disclosing that 10% of the state’s 2020 budget has been allocated to health in view of the importance of the sector.

He also informed the visiting World Bank team that preparations for the introduction of a state contributory health insurance scheme have reached an advanced stage, while all the criteria for the participation of the state in the basic health provision fund programme have been met by the Government.

Inuwa Yahaya further said that his government is committed to the revitalisation of at least 1 Primary  Healthcare Centre per ward in every Local Government Area, soliciting the support of World Bank in that direction.

The Co-Task Team Leader for NSHIP in Nigeria, Fatima Abubakar Mustapha, in company of the Task Team Leader, World Bank, Mr Gyuri Frische, assured of the disposition of the scheme to offer all necessary support to Gombe state to achieve its targets in its efforts to improve the healthcare system as contained in a statement by Ismaila Uba Misilli, Senior Special Assistant Media and Publicity to the Governor.