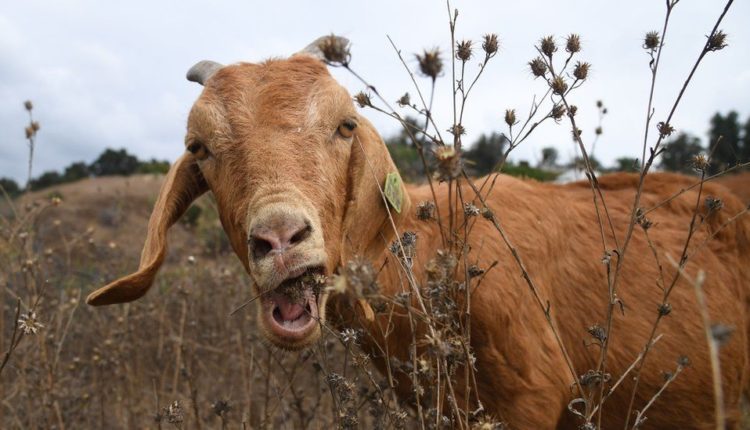 A hungry herd of 500 goats has helped save the Ronald Reagan Presidential Library from the California wildfires.

In May, the library hired the goats to clear flammable scrub surrounding the complex as a preventative measure.

The goats ate the brush, creating a fire break that slowed the flames and gave firefighters extra time to react.

The library near Los Angeles was threatened by the Easy Fire, the latest in a spate of fires causing evacuations and power cuts across the state.

The caprine contractors included Vincent van Goat, Selena Goatmez and Goatzart. They helped save exhibits including an Air Force One jet and a piece of the Berlin Wall. 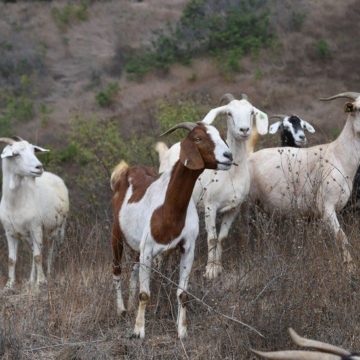 “We were told by one of the firefighters that they believe that fire break made their job easier,” Melissa Giller, a library spokeswoman, told Reuters.

The goats were hired from a local company – 805 Goats – to clear around 13 acres of land.

Scott Morris started the company last November and charges around $1,000 (£771) per acre of land.

As California continues to have more wildfires, Mr Morris says he will need to double his herd to meet demand.

Another large southern California institution – the Getty Museum in Los Angeles – was also protected this week by scrub-clearing work carried out by staff.

Ranchers and volunteers have been scrambling to evacuate farm animals, carrying them away on trailers, dropping them somewhere safe, and then turning around to rescue more.

In some cases, when the flames move too quickly for trailer rescues, the animals are simply let loose in the hope they can escape on their own and be recovered later.

Along with their owners, pets have been displaced from their homes too, with many animals killed or lost.

The Pet Rescue and Reunification Facebook group – dedicated to helping reunite pets with their owners – is flooded with pictures of animals missing amid the fires.

Several shelters under threat of fires have also had to evacuate animals.