GIZ leads discourse on business skills for farmers in Nigeria 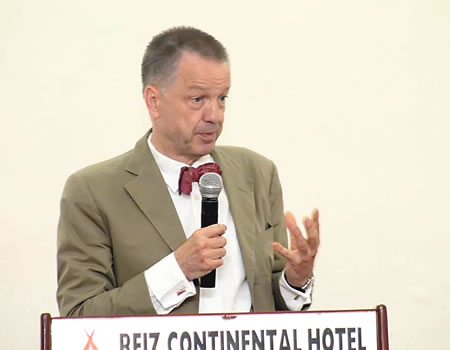 THE German International Cooperation (GIZ) has stressed the need for farmers to imbibe business skills to drive the agricultural value chains in Nigeria.

Speaking at the first National Conference of the Farmer Business School (FBS) at the Reiz Continental Hotel, Abuja, the Country Director, GIZ, Dr. Thomas Kirsch, who welcomed participants, said the aim of the FBS was to strengthen the competitiveness of smallholder farmers in the country.

He noted that the school which was inaugurated in 2010 had graduated 1 million farmers, across 24 agricultural value chains namely cocoa, rice, cassava, tomatoes, maize, Irish potatoes among others in 17 African countries with 250,000 of them from Nigeria.

“We have scaled up our outreach to 19 out of Nigeria’s 36 states because of the support we have gotten from the Federal Ministry of Agriculture and Rural Development,” Dr Kirsch added.

German Ambassador to Nigeria, HE Bernhard Schlagheck, in his presentation, stated that agriculture was absolutely key for development in societies like Nigeria.

He noted that the administration of President Muhammadu Buhari, had distinctively changed agriculture and made it the main stay of the Nigerian economy.

On his part, a director in the Federal Department of Agriculture Extension, in the Agric ministry, Mr Ime Umoh, who represented the director of the department, Mrs Karima Babangida, observed that the FBS had become a veritable approach for farmers to learn good agricultural practices and acquire business skills to make agriculture a business.

In a keynote address, Minister of Agriculture and Rural Development, Chief Audu Ogbeh, represented by the Director, Plantation Development in the ministry, Mr Quadri Olalekan, explained that the FBS had helped farmers transit from peasant farming to agribusiness, stressing that it complemented the Federal Government’s Agriculture Promotion Policy.

On her part, Regional Director for Sustainable Smallholder Agribusiness in Western and Central Africa, SSAB, Dr. Annemarie Matthess, noted that the FBS was introduced in Africa to make agriculture a business, raise entrepreneurial knowledge, make businessmen out of farmers and encourage investments to conquer the markets.

She revealed that 92,000 farmers, representing 33 per cent of the 250,000 farmers reached by the FBS in Nigeria were women, stressing the need to encourage women to become entrepreneurs.

“Farming is a business. Whoever fails to work will steal. Land cultivation without wisdom and understanding is incomplete and will result in debt,” she stated.

While noting that the FBS would be closed at the end of the year, she noted that there were plans to institutionalise the initiative through universities or extension service agencies.

She added that the Farmer Business Advisory Team would remain accessible to farmers and stakeholders.

Highlights of the conference were a short video of the achievements of the FBS in Nigeria, panel discussions, testimonies from some farmers who have benefited from the FBS, presentation of certificates to FBS trainers, as well as the adoption of the conference declaration, known as the Abuja Conference Declaration by participants, drawn from both within and outside the country.