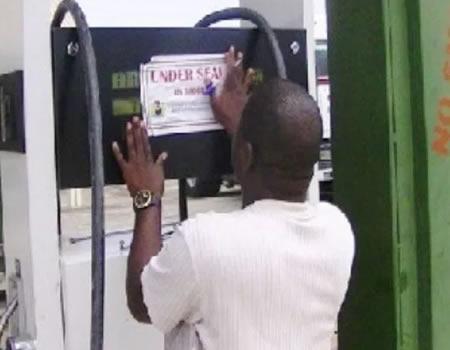 THE Department of Petroleum Resources (DPR), on Thursday, said it has sanctioned no fewer than 33 filling stations in Ogun State from January 2018 till date.

The figure was disclosed by the Controller of Operations, Alhaja Muinat Bello-Zagi, during a meeting with stakeholders in the petroleum industry in Abeokuta, the state capital.

Bello-Zagi said the offences of the affected stations include alleged diversion, over-pricing, under-dispensing, hoarding amongst other offences.

She, however, stated that sale of Premium Motor Spirit (PMS), otherwise known as petrol, had increased significantly in the period under review.

According to her, “From January this year to date, the Department of Petroleum Resources in Ogun State has visited 444 filling stations.

“Out of that figure, 245 of them have petroleum product and are selling at the official pump price of N145 per litre.

“But since last week up till now, about 75 per cent of the filling stations that we visited have PMS and were selling.

“We have however sanctioned about 33 stations for various offences ranging from diversion, over-pricing, under-dispensing and hoarding,” she added.

Bello-Zagi said the agency is working round the clock to ameliorate the sufferings being experienced by the people of the state due to unavailability of the product.

Meanwhile, the Chairman of the (IPMAN), Ogun State branch, attributed the scarcity to the sole importation of the product by the Nigerian National Petroleum Corporation (NNPC).

He added that the NNPC now gives 20 per cent of imported products to major marketers other than the 30 per cent that obtained before this period.