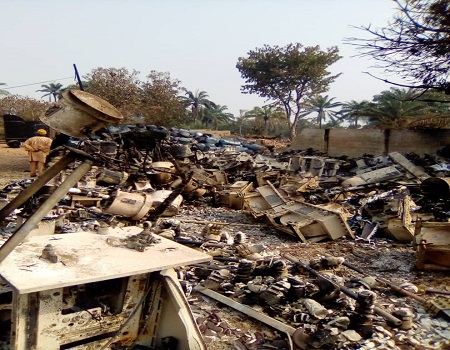 The cause of the inferno at the power plant which was established by the Federal Government to supply electricity to Akoko area of the state and some parts of Ekiti State remains unknown as at the time of this report.

It was learnt that the fire which gutted the abandoned power plant was still raging till Tuesday afternoon with no effort to put off the fire.

According to an eye witness, the fire incident had destroyed the whole power plant, attributing the destruction to the absence of the officials of the fire service at the scene of the incident, saying the residents of the area did nothing to stop the fire.

He said, ” We just saw the place burning suddenly and we don’t know what could have caused it and the firefighters were not on ground to put out the fire because they are not in this local government.”

A resident of the community, however, said the fire outbreak which destroyed the power plant could be traced to bush burning in that area.

When contacted, the Police Public Relations Officer in the state, CSP Femi Joseph, confirmed the incident and said the investigation had commenced into it.

Joseph said, ” We are yet to know the cause of the fire but we have commenced an investigation.”