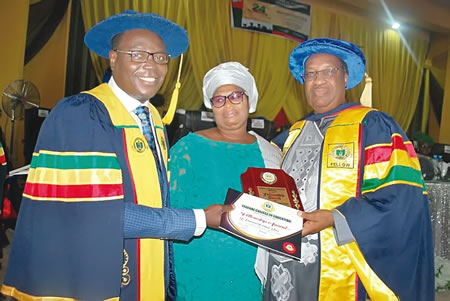 The Federal Government will not relent in ensuring that education continues to take its rightful place as the driver of national growth. This is why the administration of President Muhammadu Buhari has been unrelenting in the pursuit of increasing access in the sector, among other measures.

The Minister of Education, Malam Adamu Adamu, who disclosed this at the 24th convocation ceremony and 42nd Founding Day of the Federal College of Education, Abeokuta, said this explains why education still receives “appreciable budgetary allocations” for it to positively respond to the demands for improved funding.

Represented by the executive secretary, National Council for Colleges of Education, Professor Bappa-Aliyu Muhammadu, the minister who is the visitor to the college said it was gratifying that FCE Abeokuta, which prides itself on being the most peaceful institution of higher learning in the country, had never lost an academic session since its inception over four decades ago.

He commended the governing council, provost, the management and the entire staff for sustaining the conducive atmosphere where academic excellence had been allowed to blossom.

The chairperson of the governing council, Mrs Grace Fabode-Balogun, noted that FCE Abeokuta, which is the first tertiary institution in Ogun State, had continued to be a trailblazer in the comity of teacher education providers, but had not had the opportunity of a degree-awarding status.

“However, we have strived to bring the noble profession of teacher education into the front burner, first by being in affiliation with the University of Ibadan to award degrees to deserving students on full time basis, and recently also with the Lagos State University to run degree progeramme for students on part-time basis,” she said.

She said the college would not relent in its pursuit of achieving a degree-awarding status.

He congratulated the parents of the graduating students for their “huge sacrifices” and the minister for his persistent call for the continuous training and retraining of teachers.

He also commended the NCCE executive secretary for sustaining high quality supervision of colleges of education and support for the system.

Dr Ajayi commended the staff and students of the college for maintaining the peace and allowing academic culture to thrive.

He disclosed that the college had secured approval to serve as a study centre for the Lagos State University to provide opportunity for students to run sandwich/part-time programmes in 17 different disciplines.

He noted that the college had achieved efficient and timely process of computation of students’ results, while the issuance of certificates had also been facilitated through the production of statements of results and transcripts “in a very short time.”

Two former provosts of the college, Drs Olu Akinmoyewa and Emmanuel Filani, were conferred with the fellowship of the college at the event.

For Minister of Education

This govt promised us change; where is that change now? —ASUU president