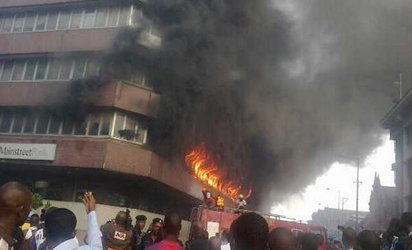 Share
THE Federal Government has ordered the Tertiary Education Trust Fund (TETFund) to ensure immediate action to rebuild the multi-million naira University of Jos, Library Complex that was gutted by fire.
Minister of Education, Malam Adamu Adamu, who gave the directive, said Library is the soul of any institution  as no research or meaningful academic exercise could be done in the University without the Library  being restored to its original state.

Executive Secretary of TETFund, Dr. Abdullahi  Baffa, made this known during on the spot assessment of the burnt Main Library of the University hosting two faculties and four departments as well as Information and Communication Technology (ICT) facility.

Baffa, while lamenting the huge loss of some irreplaceable academic materials dating back to several decades,  told the University committee led by the Vice Chancellors, Prof. Sebastian Maimako that the Minister  has directed TETFund to ensure that the least University could is the restoration of the burnt library complex to its former original state.
He noted that government delegation to the University was to ascertain the extent of the damage and how urgent intervention could come to the University.
He said: “Library is the soul of any institution. The news of the fire incident was received with sadness and that is why I’m leading the team from TETFund to see the extent of the damage.
“I’m short of words to express how I felt, when I saw that the entire library complex and collection of books, computers and furniture were all burnt to ashes.
“The Minister of Education sincerely commiserates with the management and students of the University and he is interested in how and what we do to ensure that the library complex is quickly restored and becomes functional again in no distance time,” he said.

Baffa, disclosed that beyond normal intervention, the agency would grant special intervention to the University in order to rebuild the library as soon as possible.
Vice Chancellor of the University, Prof. Sebastian Maimako described bitterly the helplessness of the university community during the inferno, disclosing that every firefighting equipment in the Plateau State was deployed during the incident but to no avail.
Maimako said that because most of the materials within the library complex were books, it helped in fueling the fire and nothing could be salvaged from the ugly incident that affected library complex which hosted two faculties and four departments on Saturday 8th of October, 2016.
The Vice Chancellor said the university had already started putting together what it would cost in  reconstructing and re-equipping the library complex, including the Information and Communication Technology (ICT) component.
He thanked the Minister of Education for his concern and personal interest in the wellbeing of the university and its students.
fgUNIJOS
Share