Arts and Culture
By Akintayo Abodunrin On Oct 9, 2016 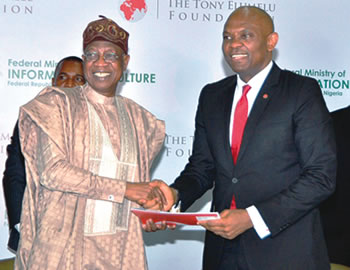 Hope rises for Nigeria’s creative industries as the Federal Ministry of Information and Culture and the Tony Elumelu Foundation sign a Memorandum of Understanding to boost its growth.

HAVING been unstructured and underdeveloped for years with players having to do it all by themselves, Nigeria’s creative industries appears set for transformation courtesy of a collaboration between the Federal Ministry of Information and Culture and the Tony Elumelu Foundation (TEF).

Credited with contributing 1.6 % to the nation’s GDP after 2014’s rebasing of the economy, it is  curious that all 13 sub-sectors of the  creative industry, including  Nollywood,  its most popular arm, still have teething problems that should have been surmounted long ago.

Happily, all these are expected to change with the partnership between government and the TEF set to re-position the industries.

Speaking at the signing ceremony of a Memorandum of Understanding (MoU) between the Federal Ministry of Information and Culture and the TEF at the National Theatre, Lagos on Tuesday, the Minister in charge of the ministry, Alhaji Lai Mohammed, said the partnership will be the catalyst that will transform Nigeria’s creative industries to a creative economy.

The Minister, who had earlier highlighted how the creative industries have turned around the fortunes of California in the United States, Mumbai in India, Turkey, Brazil, Dubai and Australia amongst others and explained that the agreement was part of the Federal Government’s efforts  to diversify the nation’s economy,   added that an innovative part of the collaboration “is the plan to convene a Creative Economy Task Force to map the creative industries to provide a better picture of what is happening on the ground and help inform policy development. We also plan to measure the economic contribution of these industries to the Nigerian economy and provide a blueprint for action.”

On why the ministry decided to partner with the Tony Elumelu Foundation and the British Council with whom it signed a MoU on August 24 in Edinburgh, Scotland, Alhaji Mohammed said government realised that it couldn’t be the sole driver of the development of the creative industries.

He said, “We realised early on that we will need to reach out to organizations that have the capacity and the drive to assist us in achieving our goals, organizations that can utilize their business knowledge, network and technical expertise to assist the Ministry in the development of Nigeria’s creative industries.”

The Minister said provision would be made for concrete benchmarks “to measure our progress in the implementation of this MoU to ensure that by the time we conclude the initial two-year period of this historic collaboration, no one will need to strain his eyes to see the achievements.”

“Last week, at an evening of conversation with the youth, President Muhammadu Buhari not only rallied support for the sector, he also directed that such support must reflect in the budget of the Ministry of Information and Culture in 2017,” Mohammed said.

Speaking earlier, the chief executive officer, Tony Elumelu Foundation, Parminder Vir, OBE, who has spent her entire career working in the creative industries from arts and culture, television and film production and financing for media and creative industries, disclosed that the MOU was dear to heart. She said the creative industries are important for Nigeria because they create jobs, generate revenues, contribute to the GDP and is leverage for soft power.

Reiterating why the MoU is important for Nigeria’s creative industries, the Briton explained that the film industry, best known as Nollywood, is the most energetic in the world and has a total estimated value of over $500 million per annum. It also provides jobs for thousands of people but sadly, an estimated $200milion is lost to piracy annually because of the absence of formal, legal distribution systems. The same, Vir added, applies to TV, radio, music, interactive and new media, performing arts, live festivals and theatre with largely untapped benefits.

Vir disclosed that the challenge posed to the TEF  by the Minister of Information and Culture when they met back in April was, “How can we work together to help transform the currently underdeveloped and unstructured creative ecosystem into an organized and profitable pool of creative industries (including tourism) that provide meaningful employment to thousands of Nigerians”

She reckoned that the choice of TEF for the collaboration is apt because it “recognizes the importance of Nigeria’s creative industries and have invested in over 300 creative entrepreneurs in ICT, fashion and textile, tourism, media and entertainment through the Tony Elumelu Entrepreneurship Program.”

She highlighted goals of the collaboration to include: “The creation of an enabling business environment for the creative industries with incentives such as easy access to finance, legal protection, tax breaks and waivers, subsidies and guarantees.

“A formal, well-structured group of creative industries that generate independent revenue locally in addition to boosting exports to increase Nigeria’s foreign exchange earnings”  and “comprehensive dataset of the creative industries, its players, size and projections, to guide prospective local and foreign investors.”

The founder of TEF, Mr. Tony Elumelu (C.O.N) commended the Minister for his vision, leadership and courage in reaching out to the private sector. He said that as an Africapitalist, he doesn’t believe development should be the sole preserve of the public sector and that as a Nigerian, “I cannot help but want to be a part of any effort to help unleash the talent, creativity, innovation and entrepreneurial spirit that beats in the heart of this country.”

Elumelu noted that despite Nigeria’s creative industries operating quietly and often in a policy vacuum with financing from friends and family, Nollywood has grown phenomenally to become a mass employer of people across its value chain. “If this can happen in such a weak enabling environment, imagine what could be achieved if we actually set out to support the sector and individuals and businesses that operate or seek to operate in these sectors,” he noted.

Elumelu added that the Ministry selected TEF as its partner because of its antecedents in the areas of development and empowerment, and assured that “the Ministry and the foundation will create the best framework to support the innovation, growth and productivity of Nigeria’s creative industries.”

Aside the signing of the MoU, other issues raised by players in the creative industries at the event were piracy, preservation of national monuments and the establishment of a National Endowment for the Arts.