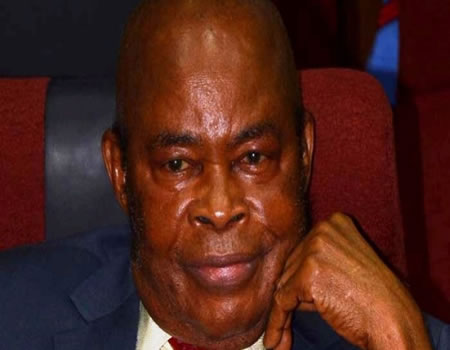 A justice of the Supreme Court, Justice Sylvester Ngwuta, was, on Thursday, arraigned before the Code of Conduct Tribunal (CCT) in Abuja by the  Federal Government  on an eight-count charge bordering on false declaration of assets.

Justice Ngwuta was among the judges whose houses were raided last year in a sting operation by operatives of the Department of State Services (DSS) where large sums of money, in both local and foreign currencies, were found.

The justice, who pleaded not guilty to the eight-count charges preferred against him, was granted bail on self recognisance by the chairman of the two-member panel of the tribunal, Danladi Yakubu Umar.

Justice Ngwuta, who is currently on suspension as a justice of the apex court, was accused of violating Section 15 of the Code of Conduct Bureau and Tribunal Act, laws of the Federation of Nigeria, which is punishable under Section 23 (2) of the Act.

The former Attorney General of the Federation and Minister of Justice, Chief Kanu Agabi, who represented Ngwuta, applied orally that the Supreme Court justice be granted bail on self-recognisance.

The request was not opposed by the lead prosecuting counsel, Mr Umar Muhammed, who is the Director of Public Prosecutions of the Ministry of Justice.

The tribunal chairman consequently granted the bail application and fixed July 12 for commencement of trial.

The Federal Government alleged in the charge that Justice Ngwuta engaged in the purchase  and sale of rice, palm oil and other  related products while serving as justice of the Supreme Court of Nigeria.

Also in the eight-count criminal charge preferred against Ngwuta, the Federal Government accused him of engaging in private business as a public officer contrary to Section 6 of the Code of Conduct Bureau and Tribunal Act.

The defendant, who was alleged to have committed the offence between June 2, 2011 and July 19, 2016, was also alleged to have made false declaration of his assets and also failed to declare some landed properties belonging to him.

He was further alleged to have failed to declare some of his vehicles including a BMW, Wrangler and Humer jeeps.

Ngwuta is currently undergoing separate trial for money laundering and passport fraud charges preferred against him by the Federal Government before Justice John Tsoho of a Federal High Court sitting in Abuja.

While Justice Ngwuta’s trial was going on before a Federal High Court, the Office of the Attorney General of the Federation had on February 8, 2017 preferred separate sets of charges bordering on breaches of code of conduct for public officers and asset declaration  breaches against him and Justice Adeniyi Ademola, a judge of the Federal High Court.

But no date has been fixed for Justice Ademola’s arraignment on the two-count charges slammed against him by the Federal Government.

Nigeria, others to lose 66% of jobs to automation —World Bank