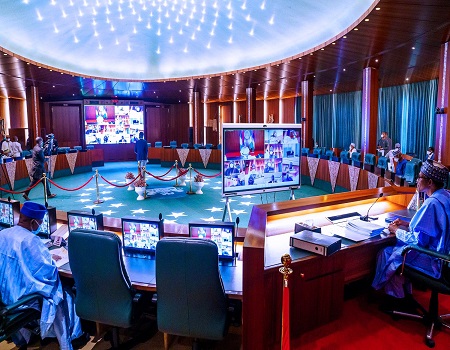 The Federal Executive Council (FEC) meeting in a teleconference, on Wednesday, approved the amendments of the Medium Term Expenditure Framework for 2020-2022 and the 2020 budget.

Minister of Finance, budget and National Planning, Mrs Zainab Ahmed, who briefed State House correspondents after the meeting presided over by President Muhammadu Buhari said that Council also approved the recommendations with key parameters including the price of crude oil at $25 per barrel, crude oil production at 1.94 million barrels per day and an exchange rate of N360 to $1.

She affirmed that the revised budget is now a total sum of N10.523 trillion, a difference of about N71.5 billion when compared to the approved budget.

She added: “This is because, as we cut down the size of the budget, we also have to bring in new expenditure previously not budgeted, to enable us adequately respond to the COVID-19 pandemic.

“The federal government in this budget will have direct revenue of funding the budget of N5.158 billion. The deficit to this budget N5.365 trillion and this will be financed by both domestic as well as foreign borrowing.

“The foreign borrowing we are doing for 2020 are all concessionary loans from the IMF which has already been approved and has crystallized, from the World Bank, Islamic Development as well as Afro EXIM bank.

“There will also be some drawdown of previously committed loans for major ongoing projects that we will be drawing from both existing facilities as well as some special accounts with the approval of Mr President and the National Assembly. And also revenue that we are expecting to realize from privatization.

“So the borrowing, the multilateral loans drawdown coming from special accounts and coming from the privatization will fund the fiscal deficit of N5.365 trillion that we have in the proposed amendment of the 2020 budget.”

Ahmed said the request of $80 million loan from the Islamic Development Bank on behalf of the Ebonyi state government was also approved by FEC.

ALSO READ: We don’t have any COVID-19 patient in ICU, Bauchi govt says

According to her, the money would be used to finance the construction of the Abakiliki ring road project.

“We have done our debts sustainability analysis that proves that Ebonyi state has the capacity to repay this loan which is provided on a basis of Libel plus and also long tenure for repayment.

The Finance minister said the council also gave approval for the Nigeria Customs Service to purchase boats, which are manufactured in Nigeria, for its surveillance and anti-corruption activities on the maritime waters.

While noting that there is a push to patronize made in Nigeria goods because of the coronavirus pandemic and also to boost the economy, she said the purchase approved for Customs would do done locally.

She added: “On prioritization of made in Nigeria products, as you know the president has set up an economic stimulus committee chaired by the Vice President. The work of the committee is to develop 12 months economic stimulus plan and we are at the final stage of that work.

“We have prioritized spending on that plan to use and consume made in Nigeria. For example, some of the public works projects that will employ a lot of our youths are to be done using strictly our raw materials, so we don’t have to import bitumen for example to build our roads.

“Some of the council memos that were taken given today have been in council waiting in the queue for a couple of months now. The one for transport is not new, it didn’t just come today and council felt it should go because it’s been there for a long time.

“But we have got approval from Mr President that spending as much as possible should be made in Nigeria on goods and products that are produced in Nigeria so that it saves our foreign exchange and also helps to grow the economy.”

In his remark, Minister of Agriculture and Rural Development, Sabo Nanono, revealed that FEC also approved €950,000 (about $1.2 billion) loan facility for the purposes of agricultural mechanization in the country.

He said the facility would cover about 632 local governments and 140 processing plants.

Nanono explained further: “This is going to be a major revolution in the agricultural sector like we have never seen before. I think the executive council has done the right thing and has approved this.

“The key to mechanization is the establishment of 632 tractor serving centres across the country. These serving centres will constitute tractor hiring skill, IT and admin office and a chemical workshop and store for storing inputs for agriculture and even output arising from the agricultural sector.

“The key to the tractor hiring skill is that every tractor will have a tracking system so that wherever it is working in this country, you will know at your fingertips where it is working and which area it has covered and how much revenue it’s getting.

“And these serving centres are going to be privately owned by the indigenes of those local governments. So, it is imperative for everybody now to key into this programme. It is going to be a competitive bid that will involve selection in terms of your experience in agriculture, your financial position, your investment of between N10 to N70 million. Because you may be probably be handed an asset or over N150 million, so we will not take that chance.

“So it’s going to be a wholly privately owned affair. The loan will be generated by these service centres and will also be in charge of repayment of these loans.

“Our calculation is between the period of three to four years, you will pay off the loan completely. And then you will have these assets worth over N150 million. You have to understand that this country in terms of agricultural mechanization is at the lowest level.”