Fasoranti, a legend at 94 ― Afenifere 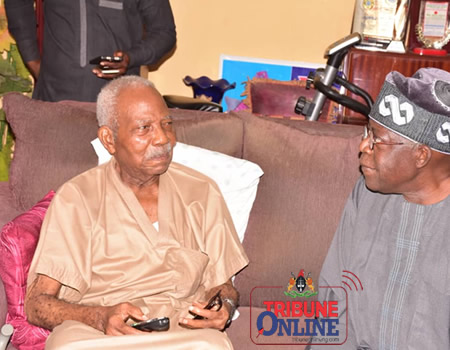 Pan-Yoruba socio-political group has felicitated with its leader, Pa Reuben Fasoranti, who will be 94 years on May 11, 2020, describing him as a legendary leader, who the group has benefitted from his wealth of experience till date.

The group, however, noted that the killing of his daughter, Funke Olakunri, by suspected herdsmen about 10 months ago, had limited the kind of celebrations it could have organised for him, declaring that if there was any befitting birthday gift anyone would give to the elder statesman it should be to ensure that the suspected killers of his daughter stand trial to determine their guilt or otherwise.

“If there is any birthday gift anyone will give to Pa Fasoranti, it is to secure the suspected killers of his daughter to stand their trial so their guilt can be determined or otherwise,” it said.

Afenifere said this in a statement issued on Sunday by its National Publicity Secretary, Mr Yinka Odumakin, while celebrating its leader, recalling that Fashoranti as a legend “rose from the life of discipline as a teacher and indeed a principal of famous schools that produced illustrious students holding firsts in many areas of life today.”

The group further recalled that the elder statesman was Second Republic Commissioner for Finance in Ondo State, who returned to his first love, which is education, in private capacity after all the political crisis major actors of that era went through, saying he never abandoned his leadership role and the reason why Afenifere had benefited from his wealth of experience till date.

However, Afenifere said major tragedy that befell Pa Fasoranti last year, while he was 93 years of age, was the killing of his daughter, Funke, by suspected herdsmen, lamenting that the ugly incident had made him “see the interment of a daughter he had thought would be one of those to bury him when the last day would come.”

“This limits the kind of celebrations we can have to him today in addition to the state of the country,” the group sadly declared.

Afenifere further lamented that as if the pain was not enough, there was no word about the killers for about nine months until recently, pointing out that even after the suspects were charged to court for prosecution, there had been some form of drama being witnessed.

“There has been the shenanigan of one of the major suspects who used to be secretary of Miyetti Allah in Ondo State falling victim of COVID-19 with about three attempted escapes from jail,” Afenifere said.

The group, however, wished the celebrant happy celebrations all the days of his life.