Arts and Culture
By Akintayo Abodunrin On Jul 3, 2016 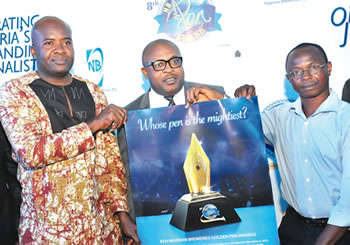 THE race for the 8th Nigerian Breweries Golden Pen Awards is on as journalists have been invited to submit entries for the three available categories.

Launched in 2008 by Nigerian Breweries Plc to celebrate the partnership between it and the media, the award’s objective is to promote professionalism and objective reportage of events in the country.

Speaking at a news briefing on Tuesday, Corporate Adviser, NB Plc, Kufre Ekanem, disclosed that the theme of the past two editions, ‘Education, Youth Empowerment and Talent Development’ have also been retained for this year.

Explaining the decision, Ekanem said “each of the past seven editions have strengthened the credibility of the NB Golden Pen Awards because they have made it more inclusive and ensured an increased media buy-in.”

He added that only reports that were published in the country between January 1 and December 31, 2015 are eligible and that each person is limited to a maximum of three entries.

Entries, he continued will be opened till Friday, August 19 while the awards ceremony will hold on Friday, October 28.

Ekanem, who disclosed that TPT International is the new agency in charge of collating entries and that there’s no discrimination between online and print publications, said that originality, news value, use of resources, credibility and factuality are some of the criteria the jury would use in appraising entries. Others include info-graphics, layout/headline, clarity and social responsibility.

7 ways to teach mission to children