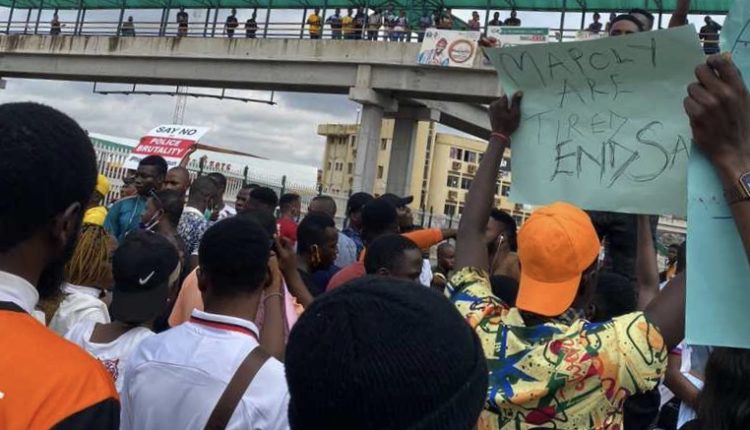 The Ogun State Police Command has arrested no fewer than 23 persons who participated in the EndSARS protests in Abeokuta, the State capital, on Saturday.

The Command in a statement issued by the Police Public Relations Officer, Abimbola Oyeyemi, said the peaceful protest turned violent when the protesters stormed the venue of the grand finale of Owu Day Festival and broke the windshield of the official vehicle of the State Deputy Governor, Engr (Mrs) Noimot Salako -Oyedele.

They demanded to meet with Nigeria’s former president, Chief Olusegun Obasanjo, who was equally in attendance.

The protesters, who converged at the popular Panseke area of the metropolis, went round major areas in the State,  which included the palace of the Alake and Paramount Ruler of Egbaland, Oba Adedotun Gbadebo.

The monarch was reported to have appealed to them to be peaceful with their agitations, instead of yielding to the plea of the traditional ruler, the protesters proceeded to the Special Anti-Robbery Squad (SARS) office at Magbon, and allegedly fired shots.

Oyeyemi said one SARS operatives, Sergeant Akabudike Augustine, was injured while the protesters were dispersed.

The PPRO said one pump action, two locally made pistols, some rounds of ammunition and assorted charms were recovered in a vehicle marked LAGOS KRD 551 GJ abandoned by the protesters.

The governor, in a statement by Kunle Somorin, his Chief Press Secretary, expressed displeasure at the destruction of police station, public property and harrassment of innocent citizens in the last couple of days.

The governor said, “Whilst we respect the rights of citizens to ventilate their views on any matter of concern and not condoning the excesses of SARS, such views should be expressed in manners that do not undermine law and order or security and safety of lives and property.

“We cannot condone illegalities and lawlessness  in an attempt to call attention another issue.

“It is gratifying that President Buhari, as the Commander-in-Chief, has given appropriate directives to the Inspector-General of Police (IGP) on this issue and IGP has taken some immediate steps in this direction.

“Ogun State Government is closely monitoring developments in this regards and enjoins parents and guardians to prevail on their children and wards to refrain from any act that may pitch them against the law.

“The youths are, in particular, the focus of the Building Our Future Together Agenda of our Administration. Therefore, their safety and security are topmost priorities, the same way we have responsibility for safety and welfare of all residents and citizens of Ogun State.”