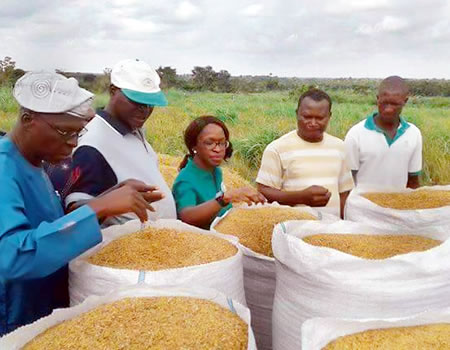 The agricultural sector in Nigeria has in recent times focused on rice production to reduce the millions of naira used on importation of the product which is a common staple in Nigeria. OLAYINKA OLUKOYA reports that to make this vision possible, Eegua community in Yewa North Local Government of Ogun state is already poised to take local rice production to international level.

As the demand for rice increases in Nigeria and riceproduction rises continually, reaching 15 million metric tonnes annually, a development that the government insists will save the country the sum of N300 billion previously used annually on importation of the commodity. And as the demand soars, government continues making concerted efforts to promote local production of rise.

This significant increase in local productions and the efforts to make the local variety qualitative and more attractive to Nigerians has led to more states engaging fully in riceproduction and packaging it in a way that would make it presentable for export. And as more states now produce rice around three times a year, it is the vision of government and farmers alike that the product will soon become part of the produce being exported to other West African countries

And like other riceproducing states, Ogun state, the foremost producer of rice in the South-western part of the country is billed to be one of the expected exporters of rice as rice farmers in the agrarian town of Eegua, in Yewa North Local Government Area of the state, have vowed to make it so provided they get the required assistance from government at all levels.

Eggua is an ancient town in Yewa North Local Government Area of Ogun State. The town is linked to Ilase and Oja Odan, it is purely an aggrarian

community; a quiet and peaceful town.

The journey from Abeokuta to the town ordinarily should not be more than an hour and a half but with the deplorable state of the road, the journey might be longer than necessary.

Ogun which prides itself as one of the highest cotton and cassava growers in the entire South West region of the country; is also known for its prowess in local rice farming. Indeed, the state is popular for its production of brown rice popularly referred to as Ofada rice. But at present, the state has moved beyond mere Ofada riceproduction and has evolved to the production of the NERICA 8 rice and FARRO 44 rice which is now planted in some parts of the state.

Some have attributed this development to one of the cardinal programme of the Senator Ibikunle Amosun led administration in the state; agricultural development which goes hand-in-hand with industrialization. This seems to be yielding the anticipated result as plans to flood the Nigerian market with branded rice in the next few months is already underway.

To ensure that the country stops being a consumer nation that depends on other nations for rice which is a part of the daily staple for the average Nigerian family, farmers in Eegua town are determined to make Ogun state the highest producer of rice if government and other stakeholders give real support to them financially and materially.

The business of rice growing in Eegua has gone beyond sustenance farming and the farmers are producing on a commercial scale by utilizing fully, land and other inputs provided by the government for all farmers that are ready to go fully into riceproduction. The combined efforts of government and the farmers is positioning the state as a viable food basket of the nation which will not only produce food but also create employment opportunities in diverse forms for the people.

A visit to Eegua by Nigerian Tribune revealed revealed that the farmers in partnership with the state government are determined to brave the odds and do everything within their power to boost riceproduction and uplift the economic situation of the state and Nigeria as a whole. There was a clear presence of commercial riceproduction which has a source of funding beyond the grasp of the people.

Though government also has rice farms in Onigbedu town, Ewekoro Local Government Area of the state and Iloti-Ijebu in Ogun East Senatorial District, the Eegua farmers believe their production is better positioned for export as they are more commercial oriented in production on the rice farm that presently occupies 500 hectares of land but will be expanded to 2,000 hectares in the next planting season.

The riceproduction project is not a partnership between the Ogun State Government and the farmers alone but also in conjunction with the International Food for Agricultural Development (IFAD). This may be the basis of the farmer’s belief that their production will catapult Ogun state beyond the realm of local rice producers that produce only for the immediate communities to commercial rice farmers who have international recognition and the farmers are not timid to express this confidence.

Those that spoke with the Nigerian Tribune on its visit were optimistic that with their plans and efforts, the state will grow economically though they agreed that a lot still needs to be done to achieve optimal result in the areas of modern day equipment as they still employ old methods and crude outputs during harvest.

However, most of the farmers that spoke with Nigerian Tribune lauded the Ogun State Government for its interest and commitment to promoting riceproduction which is already putting the state in line as force to be reckoned with when it comes to rice production in all its stages.

Speaking on how riceproduction has given people in the community a new lease of life, Mr. Adedoyin Babatunde, a rice farmer stated that the project had provided employment opportunity for the unemployed youths in the locality, adding that government considered the rice business as one of the ways to achieve food sufficiency in the state by providing the land and other items for the project to be a successful one.

He however explained that more support is still being expected from government, especially in the areas of financing, adding that many of them are willing to expand the project if they get assistance in form of soft loans from the Bank of Industry (BoI) and other relevant agencies of government.

He advised government to provide them with irrigation system on the farms in order to have all year planting, adding that, “we appreciate government for providing us with this opportunity of making the unemployed youths and retirees gainfully engaged. We need government support more than ever. The Ogun State Government under the leadership of Senator Ibikunle Amosun has done well. Like Oliver Twist, we are asking for more. The little that we have achieved thus far is by the benevolence of the state government through the provision of land and inputs needed. It was the state government that cleared the land for planting. The rice seeds, fertilizers and herbicides were also provided by them.

“We intend to go far with this project, but we need capital to sustain it.

Rice planting is far beyond land clearing which is major. It requires labourers that will do the planting, weeding of grasses, spraying to avoid pests and harvesting,” Babatunde said.

Another rice farmer, Mr. Ojo Matthew, corroborated Babatunde’s assertion in the area of need for more assistance from government. According to him, they are ready to plant rice three times annually if the government takes the business seriously, noting that, “the state government deserves commendation. Having said that, I think government should give adequate attention to the project if it wants to enlist itself as the highest grower of rice the country.

“The government team should come up on time to clear the land against the next planting season. Apart from inputs, we need capital to perform optimally.” Matthew stated.

For Mr. Olugbenga Popoola, Ogun State will soon become the “Thailand” of Nigeria in rice production. He explained that the state is committed to promoting local riceproduction, adding that there are three varieties of rice being planted across rice farms in the state.

He equally lent his voice to that of his colleagues soliciting for government assistance in the area of financing. “This rice project is a laudable one. We appreciate government for giving us inputs and clearing of the land which is a major factor. But these are not enough. If government could assist the farmers the more, the state would soon be adjudged as the highest producer of rice in the country, I mean the ‘Thailand’ of Nigeria,” Popoola added.

The Special Assistant to Governor Amosun on Agriculture, Mr. Tosin

Ademuyiwa, assured the farmers that the next phase of the project would be more mechanized than what it obtained this year and enjoined the younger generation to key into the agricultural revolution of the state government in the rice project, saying that more machineries had been purchased by government to boost production.

On her part, the state Commissioner for Agriculture, Mrs. Adepeju Adebajo, stated that, “This is a pilot scheme of 500 hectares planted at 3 nearby locations in Eggua environs. Ogun State Government supported the farmers by land clearing and preparation, provision of herbicides and fertilisers, extension agents and harvesting storage and processing equipment.

“Through the pilot the farmers and ministry are planning improvements to be implemented in Eggua which will be one of the rice clusters to be established by the government. Already the irrigation channels started at Eggua a few years ago are being revived and government has facilitated acquisition of rice processing equipment and mills for private sector operators.

The government recently procured 20 bulldozers which are being made available for land clearing which is one of the biggest challenges faced by farmers. More equipment will be purchased before the next planting season and there are plans to provide irrigation.

“Ogun State is very suitable for rice growing and there are at least 3 large clusters with suitable soil conditions to   support rice. Government will act as a catalyst in the sector to encourage more private investors and farmers to go into rice.

“Ogun State is particularly proud of our own indigenous specialty of Ofadarice which has extensive markets at home and abroad and is working towards setting quality standards and certification of Ofada rice,” she said.

And as the nation gears up for major riceproduction in the coming months, Eegua community has started the process of leading the pack in southwest Nigeria.