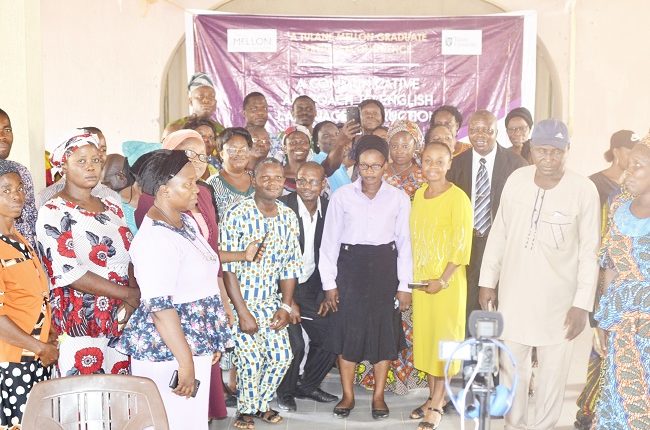 A concerned Nigerian born United States-based PhD candidate, Japhet Ajani, of the Tulane University, through Tulane Mellon Graduate Programme Conference, has empowered teachers in Ogbomoso, Oyo State, on how to adopt sustainable approaches in actualising appropriate communicative skills of English Language instruction as well as other subjects in the academic system.

The development was established at a workshop organised by an NGO, at Ile Ogbomoso Parapo hall, Apake, Ogbomoso, Oyo State. The participants at the workshop were enlightened on the need to adopt flexible, emotional and intelligent approaches in dealing with pupils as this would enhance students’ productivity.

Participants at the workshop were also afforded the opportunity of creating friendly approaches in learning, contrary to the hostile approach pupils were hitherto used to. One of the unique approaches highlighted to aid comprehensive and healthy learning environment included consistent engagement of youths, bonding, group work, double-checking studies and knowing the strength of students.

According to the convener, Ajani, the initiative was a wakeup call for stakeholders in the education sector and a means of adopting new approaches in teaching skills in the state.

“It has been a long term goal for me to give back to my society and when the opportunity came through a grant from the Mellon Foundation in the United States, I took it up to help my community. I am from Ogbomoso and I went through the same system; it isn’t what we used to know. Now students, especially pupils in government schools, don’t have the necessary support and advanced tutelage needed from their teacher.

“I just felt if I have an opportunity to help these kids, whose future I don’t know, I just wanted to give back to my society. This is born out of compassion and a lot of reflection over the years to help teachers in my community. We believe that what we have impacted on teachers in this community through the exclusive workshop will go a long way as well as have a positive impact in the education sector,” he added.

One of the lead speakers, Dr. Clement Odoje, noted that the main focus of the workshop was to re-orientate teachers across board on their relationship with students in order to improve their lives and the education system.

“We are glad to teach language teachers how to use communicative approaches. The essence is for learners to be able to use the language in and outside school. And if that is the goal, we discovered that proficiency of the students will be achieved earlier than what we were doing before. To the best of my knowledge, we have not introduced Communicative Language Teachings (CLT) to the education curriculum in Nigeria. We have seen the effect of language learning outside the country. On our own, to complement government’s effort, we thought we should introduce our teachers to that.

“Our students will not just go to school and pick up a course because they just want to pass; it has gone beyond educational achievement. What can they use what they learnt in school for outside the school? We have come to expose our teachers to CLT,” he added.

In his remarks, the district chairman for the five local government education areas in Ogbomoso, Reverend Segun Olarinde, commended the brains behind the initiative, just as he noted that the information was useful to all teachers as well as boost the knowledge of pupils.

“On behalf of the Ogbomoso North, South, Oriire, Surulere, and Ogooluwa local government areas, we sincerely appreciate the gesture of the facilitator. The new approach is interesting and we had a different narrative from what we are used to. Yet we didn’t pay a dime. The tutors impacted us to the fullest and we are grateful.  As a result of this, we will not hesitate to spread the good news beyond Ogbomoso so as to upgrade the education system of the state,” he said.

Why Alaafin told us to cooperate with Amotekun — Bani, head of Fulani community, Oke Ogun