Capricorn Concierge Tourism Services Limited has launched the first secondary school domestic tourism club with the aim of practically promoting tourism by engaging the young at heart for a sustainable and responsible development of the sector.

The club, tagged Ibadan Domestic Tourism Club has over 200 students of the Bishop Phillips Academy, Iwo road inducted as the first set of members of the IBDTC.

The induction which was a mini conference, came handy with different educative features and practical engagement, to not only enlighten, but also give the newly inductees an edge in the field of tourism; to know, explore and tell others about the tourism and its many benefits. 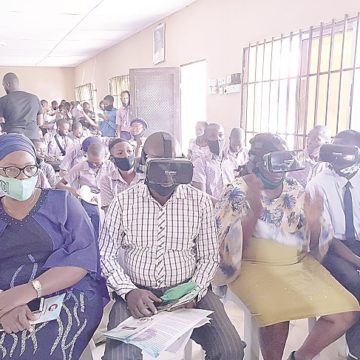 After a a 30 minute presentation on types of tourism and it components, the organizers took the students on an virtual tour of the sights and sounds of Ibadan through the aid of a virtual reality technology that kept all and sundry spell-bound and glue to the gadget for a long time.

Speaking at the induction ceremony of the first members of the Ibadan Domestic Tourism Club, the Chief Executive Officer of Capricorn Concierge Tourism Services Limited, Ibitayo Araoye, revealed that the IBDTC is designed as an extra-curriculum educational activity aimed at educating, enlightening and practically exposing secondary school students to the mainstream of the tourism industry through various innovative tourism-related activities.

“The Domestic Tourism Club is tailored to give the members an unforgettable tourism experience about their domestic destinations as well as enlighten the students on the role and importance of history, culture and heritage in the socio-economic development of tourism and creating destination activities.

The club members would have the opportunities to view and experience the attractions being promoted to them without leaving their classrooms through the aid of a virtual reality technology, a new trend the innovative space that has brought the world to the doorstep of everyone.

Araoye explained that the club theme, ‘Catching them young’ was deliberate and directed at the young at heart because “we want to nurture them for the world outside the school and expect the club members to play important roles in the promotion and development of domestic tourism during and after their secondary school education through the theoretical and practical knowledge impacted in them about the destination and attractions within their domain.”

According to the CEO, “there are numerous benefits and opportunities for clubbers to gain from being members, and these range from career enthusiasm, knowledge acquisition, virtual tours to local domestic attractions, introduction to VFR (Visit Friends & Relatives) sector of tourism, avenue to know the unique history, culture and heritage of the people and other tourism contents that complete the value system of the industry. 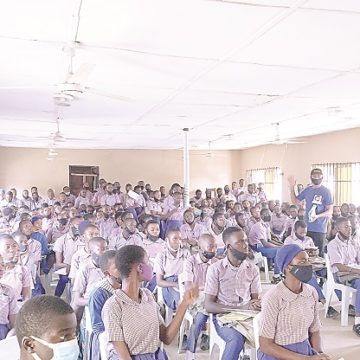 Expressing appreciation to the organizers of the event, the representative of the principal of Bishop Phillips Academy, who was elated about the uncommon opportunity given to the students as the first to be inducted into the IBDTC and also experience the sights and sounds of Ibadan tourism splendor through the use of a virtual reality gadget, said the experience is a real opportunity that will linger for a long time.

This is also a preparation for them to step into a more innovative level in their quest to gain additional knowledge which will put them in good stead outside the classroom experience. This is a step in prepare them for future engagements.

Also, the Oyo State coordinator of the Nigeria Tourism Development Corporation (NTDC), Mr Femi Macurley who was also a forefunner at the event said the time is ripe for the youth to hold their future in their hands because the future belongs to them.

“Giving them this opportunity is long overdue and the step taken by the organizers was just right to stimulate the right spirit that will make the practical tourism move a sustainable one. On our part, we will always be at the forefront to support good gestures that align and promote responsible and practical tourism in Nigeria.”

Mr James Miller, who has spent years in Ibadan and also a member of the team to the school for the induction, said he was overwhelmed by the attendance and enthusiasm among the students. According to him, the future is bright with the acceptance spirit the students have shown. We then encouraged the organizers to keep the tempo of the domestic toruism promotion.

Some of the students who spoke after the virtual reality show said tourism is interesting and is a way to bring the world closer to the people.