Edo 2020: Confusion in APC over waiver for Ize Iyamu 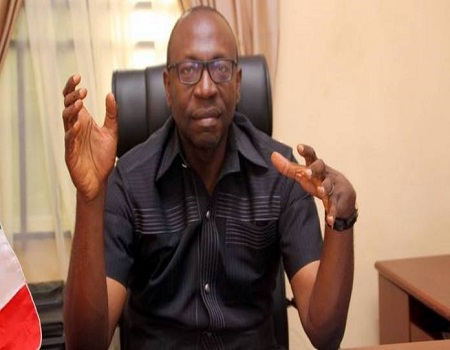 Share
Former Peoples Democratic Party governorship candidate in Edo state and new entrant to the ruling All Progressives Congress,  Pastor Ize Iyamu is set to contest for the governorship ticket of the party with his main rival and incumbent governor,  Godwin Obaseki.
The party’s primary to produce its standard-bearer is expected to hold June 22.
Pastor Iyamu, investigation revealed he would make himself available next week at the party national secretariat in Abuja to pick the nomination form.
Feelers from the party national secretariat gave the indication that the decision to grant Pastor Iyamu waiver to enable him to contest the party primary was reached on Thursday at the National Working Committee meeting presided by Comrade Adams Oshiomhole.
The former PDP governorship candidate joined the APC last December.
Prelude to Wednesday meeting where the decision was reached, Comrade Oshiomhole had tactfully displaced the deputy national secretary, Victor Giadom and announced Architect Waziri Bulama as acting national secretary despite protestations from governors and party chieftains from the Northeast who continue to insist that replacement for the immediate past occupant of the office and sitting Yobe state governor,  Mala Buni must emerge through a zonal congress.
Oshiomhole claimed that Architect Bulama was appointed to hold the position in acting capacity pending the Northeast
zonal congress to ratify his appointment or produce a substantive national secretary for the APC.
A party source told  TribuneOnline in confidence that the APC NWC was divided over the decision to grant Pastor Iyamu waiver.
A member of the NWC present at the meeting, however, said the waiver was a fait accomplice.
He said:” Yes,  a decision has been taken but don’t quote me”
Prodded further by TribuneOnline if the decision would not instigate crisis in the party, the NWC member said Pastor Iyamu has met the conditions set by Article 31( 2,3) of the APC 2014 Constitution ( as amended).
The provision reads: “Subject to the approval of the National Executive Committee, the National Working Committee may in special circumstances grant a waiver to a person not otherwise qualified under Article 31(1) of this Constitution if, in its opinion, such a waiver is in the best interest of the Party.
“A person may be granted a waiver only on condition that:
i. He or she has not been convicted by any court of competent jurisdiction for any criminal offence,
ii. He or she has applied for a waiver in writing to the National Working Committee of the Party through his/her appropriate Ward, Local Government Area/Area Council, State, Federal Capital Territory and zonal committees.
“iii. He or she has signed an undertaking to uphold and implement the manifesto of the Party in the event of winning the election.”
It is not clear which of the State Chapter Pastor Iyamu addressed his application as the Edo state chapter is polarised into factions.
NIGERIAN TRIBUNE