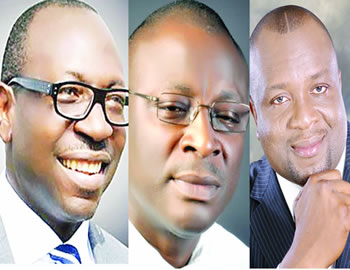 As the Peoples Democratic Party (PDP) in Edo State holds its governorship primaries today, BANJI ALUKO examines some issues that may sway delegates.

While 12 aspirants contested the primary election of the ruling All Progressives Congress (APC) on Saturday, the primaries of the Peoples Democratic Party (PDP) will be contested by only three aspirants. The contenders are a  former Majority Leader of the Edo State House of Assembly, Matthew Uduoriyekemwen; a former Secretary to the Edo State Government, Pastor Osagie Ize-Iyamu, and a former governorship aspirant of the defunct All Nigeria Peoples Party (ANPP), Solomon Edebiri.  Many names were touted to contest the primaries of the former ruling party, the PDP, but only three names eventually collected the N13 million nomination form. One of the early aspirants, Osaro Onaiwu, opted out of the race after he flooded Benin City and other parts of the state with his campaign billboards and posters. When it was time to collect the nomination form, the director general of the PDP Governors Forum, he failed to show up. Other speculated names for the ticket included a former Minister of Works, Architect Mike Onolememen, and Senator Ehigie Uzamere.

Before now, two zones-Edo South (Benin) and Edo Central (Esan)–had been locked in succession battle across the two major political parties in the state. Edo South in Lucky Igbinedion ruled between 1999 and 2007, while the only governor produced so far in the current republic by Edo Central, Oserheimen Osunbor, had his tenure truncated after spending only 18 months in office. The third senatorial district, Edo North, will be completing eight years with Oshiomhole by November12. As far as Edo South is concerned, Edo Central has had a fair share of power and it was time power returned to Edo South. Edo Central would, however, not have that as they continued to lobby to allow the zone produce the governorship candidates of the APC and the PDP.

The hope of having an Esan governorship candidate in the PDP was, however, extinguished after their leading Esan aspirant in the race, Architect Mike Onolememen, refused to declare interest in the race. For Onolememen, who is from the Edo Central senatorial zone, the decision not to contest the primaries was a strategic one made to allow an aspirant from the Edo South senatorial zone pick the ticket of the PDP. With Onolememen out of the way, it was easy for the PDP in the state to effectively zone the governorship ticket to the Edo South and deputy to Edo Central. With a voting population put at about 58 per cent and a strong determination to produce the next governor, it appears the PDP understands that the first step to winning the election is picking a candidate from the Edo South zone.

With only three governorship aspirants, it is believed that the PDP may have less post-primary crisis to battle with unlike the APC with 12 aspirants. The successful conduct of the ad hoc delegates’ election last week meant that the status of delegates, who will elect the party governorship aspirants, is settled. There is also something that appears like unity among the governorship aspirants. They have been preaching peace and have vowed to combine forces with whoever among them picks the ticket. Last week, they were all brought together under one roof by an Edo PDP group, Unity League, to discuss how they can foster unity among the aspirants and the supporters. On that occasion, the aspirants once again gave their words to give their support to whoever wins among them.

Edebiri was the candidate of the All Nigeria Peoples Party (ANPP) in the last election. He won many hearts with the way he marshaled points during debates organised for the candidates. He led the Edo ANPP group into the merger with the ACN and the Congress for Progressive Change (CPC) to form the APC. He joined the PDP in 2014 after complaining that only the ACN group was running the show in the new APC. Edebiri has never occupied any political office before, hence he is seen as a “decent” politician. He, however, has the outlook of a lightweight politician, who may not be able to tackle the ruling APC.

Edebiri has never held any political office before, hence he is dubbed “Mr. Clean.” Many in Edo think that he is an ideal governor. Edebiri said he has a masterplan to develop Edo through industrialization and agriculture, pointing out that Edo State has no reason to be poor. As a businessman, he plans to run the state as a business enterprise profit and loss methodology.

He has advocated a paradigm shift from age-long imposition of candidates to a free-and-fair contest. Many who are apolitical in Edo seem to be in love with him and are yearning for him. Others, however, think that he has not built a political structure capable of winning the PDP ticket or the final election.

Another aspirant jostling for the PDP’s ticket is Matthew Iduoriyekemwen. The two-term member of the Edo State House of Assembly, who contested the governorship election in 2012 is back in the race again. He was a former majority leader of the Edo State House of Assembly and former commissioner in the board of the Niger Delta Development Commission (NDDC). Youthful and energetic, he is working behind the scene to actualise his goal. He describes himself as the only original PDP member among the aspirants as he has never left the party at any time, unlike Ize-Iyamu, who left and returned, and Edebiri, who joined the PDP in 2014. He is also quite popular in his Ikpoba-Okha Local Government Area, where he may have an upper hand during the primaries.

Pastor Osagie Ize-Iyamu appears to be the leading aspirant in the PDP. The ambition of the former secretary to Edo State government is being supported by many PDP leaders in Edo State such that many think that it is almost impossible for him to miss the PDP ticket. Ize-Iyamu is well grounded in the politics of Edo State and people close to him are saying that he is already looking beyond the PDP ticket.

His supporters claim he has done the needful to sweep the votes of delegates in the Edo North and Edo Central, while he is expected to share Edo South with Uduoriyekemwen and Edebiri. This, if it plays out, will effectively hand him the PDP ticket. Despite staying only two years in a party he was disconnected from in 2007, Ize-Iyamu is said to tower about the other aspirants in terms of political followership, structure and connections.

The greatest political asset attributed to Ize-Iyamu is his ability to shake the APC and bring out politicians from the party to work for his ambition and that of the PDP. This is because he was a foundation member of the precursor of the APC, the defunct Action Congress of Nigeria (ACN), where he became the South-South vice chairman. He demonstrated this capacity when four APC lawmakers in the Edo State House of Assembly joined him in defecting to the PDP in June 2014. He is about the most visible governorship aspirant in Edo State and has been reaching out to different groups galvanising support for his ambition.

He also parades an intimidating profile. He has been directly involved in the politics of Edo State since 1999, though he cut his political teeth in 1988, when he was assistant to Lucky Igbinedion, when the latter was chairman of the old Oredo Local Government Area.

The same Lucky Igbinedion appointed him Chief of Staff when he became governor in 1999. The following year, he took a step further by emerging Secretary to the Edo State government. He held the position for seven years till 2007 when Lucky Igbinedion completed two terms as governor. Since he left the APC, the role he played as SSG in the Lucky Igbinedion’s administration has been put under the binoculars but his traducers have not been able to indict him of any wrongdoing.

Ize-Iyamu has never contested any election before, but he has been deeply involved in many elections and was instrumental to the emergence of Governor Adams Oshiomhole as governor as he joined forces with some other politicians to achieve that goal after being shut out of the PDP. He was Governor Oshiomhole’s campaign director in 2012. When he left the APC in 2014 for the PDP, he was appointed the director of former President Goodluck Jonathan campaign team for the 2015 presidential election. In that election, the PDP won the presidential and National Assembly election in Edo State.

The Eighth N/Assembly: One year on

Ondo 2016: Will Akure people have their way this time?