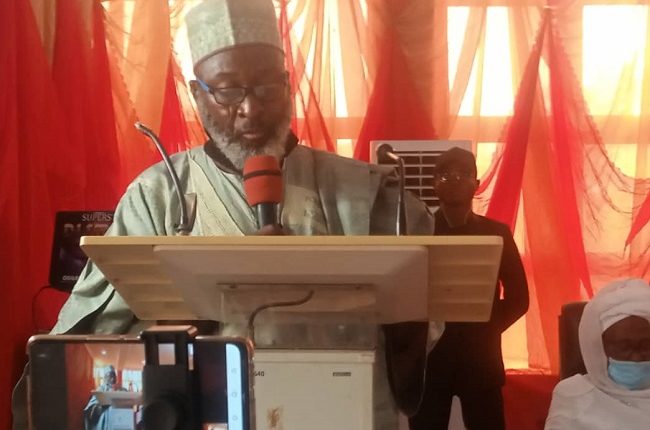 A lecturer in Department of Religions, University of Ilorin, Professor Yahya Oyewole Imam, has identified reasons for the festering insecurity in Nigeria and proffered solutions to the seemingly intractable problem.

The don underscored the need for the government and the Nigerian people to resolve to shed the toga of inequity and ethnicity in all matters of state, especially when dealing with shared problems like general insecurity.
Professor Oyewole Imam spoke last weekend at the 28th Ramadan lecture of the University of Ibadan Muslim Community (UIMC), held at the multipurpose hall of the university’s central mosque.

In his lecture entitled ‘Islamic Response to the Problem of Insecurity in Nigeria’, the university teacher explained how factors like the proliferation of arms, religious fanaticism, unemployment, corruption and failure of successive administrations to satisfy the yearnings of the teeming populace have put the nation in a precarious position.

He lamented the worsening security situation where no one or part of the country now seems safe, saying the development had brought the nation’s image into disrepute before the rest of the world.

Professor Oyewole Imam noted that presently, there was no part of the country where one case of insecurity or the other was not experienced or reported virtually on a daily basis.

“The enormity of this problem and the inability of the existing measures at curtailing it necessitate a search for solutions in Islam. These solutions are derived from scriptural evidence and practical actions to implement them in Islamic history,” he said.

According to him, causes of insecurity like the porosity of the Nigerian borders which are manned by agents who compromise the ethics of their job and corrupt practices of government officials arise from the betrayal of trust, which is a condemnable act in Islam.

He charged the government at all levels to address the issue of unemployment by providing enabling environment for investments to thrive so that investors could complement government efforts in providing decent jobs for the teeming population.

He also said that religious fanaticism, as a cause of insecurity, could be addressed through enlightenment and education.
Professor Oyewole Imam described the claim that powerful people are behind insecurity in Nigeria as a defeatist position that should not be held by any worthy government.

“Deterrent punishments must be given to perpetrators of insecurity, irrespective of their status when the charge has been proven beyond doubt against them. There should be no sacred cow in matters of criminals perpetrating insecurity,” he emphasised.

The event was chaired by the Special Adviser to the Oyo State Governor on Economic Matters, Professor Musibau Babatunde.

In spite of the huge investment in the water sector by the government and international organisations, water scarcity has grown to become a perennial nightmare for residents of Abeokuta, the Ogun State capital. This report x-rays the lives and experiences of residents in getting clean, potable and affordable water amidst the surge of COVID-19 cases in the state…Don lists conditions  Don lists conditions

The Lagos-Ibadan railway was inaugurated recently for a full paid operation by the Nigerian Railway Corporation after about a year of free test-run. Our reporter joined the train to and fro Lagos from Ibadan and tells his experience in this report…Don lists conditions  Don lists conditions