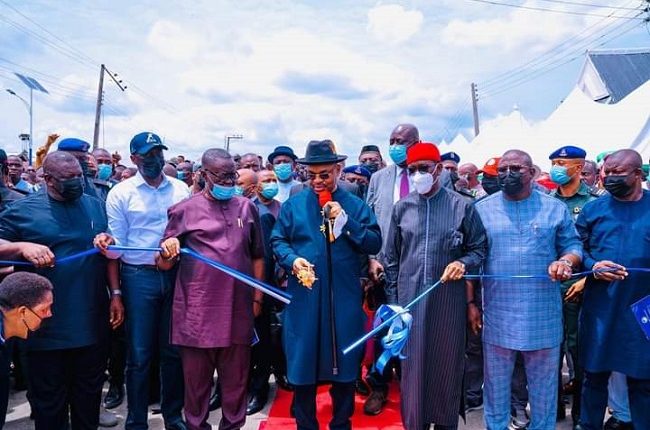 Governor Udom said the true dividends of democracy are to execute projects that everybody, including the common man, could benefit from.

He added that Governor Ifeanyi Okowa of Delta has proven to be one who has his people at heart by embarking on projects that touch the common man in the society.

He, therefore, called on Deltans to reject any candidate from the opposition parties in the state seeking their votes in the next general elections

He also claimed that it appeared only governors elected under the platform of the People’s Democratic Party (PDP) are inaugurating projects in the country.

Furthermore, he took a swift at those who criticize South-South governors based on monetary allocation to the states, observing that it was not enough to go publishing how much allocation a governor receives without finding out the cost of doing projects in the area.

“You don’t just go and say Delta State receives a particular allocation. People should take their time to know the cost of doing projects in the state. 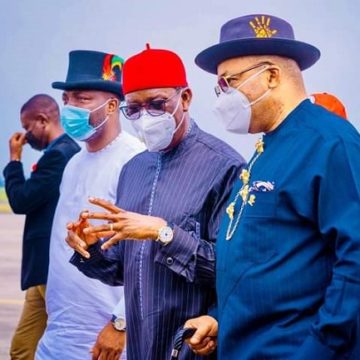 “Sometimes, we have to dig up to six to eight feet to do a road. As I speak to you, Akwa Ibom has not gotten a one-kilometer road from the Federal Government.

“The one that we wanted to partner with them to do they said has been awarded, but till now, nothing. It now takes five hours from Akwa Ibom to Calabar, something that used to take just one hour,” he lamented.

Gov Udom commended Governor Okowa for inviting him to inaugurate projects in the state, stating it was a show of love and respect that is well appreciated.

Speaking during the inauguration of the projects, Delta State governor, Senator Okowa commended the conducts of youths in communities hosting government for being peaceful and corporative with contractors handling projects in their area.

He reiterated his commitment to youth empowerment in the state, noting that although the country was going through trying times, his administration would continue to partner in areas of skill acquisition and employment.

Okowa, who reiterated his call for prayers for the nation, said current situations in the country were displeasing, urging Deltans to continue to keep faith and hopes with his government.

Ramadan: We need more of your kind in Kwara, cleric extols Sheriff Shagaya