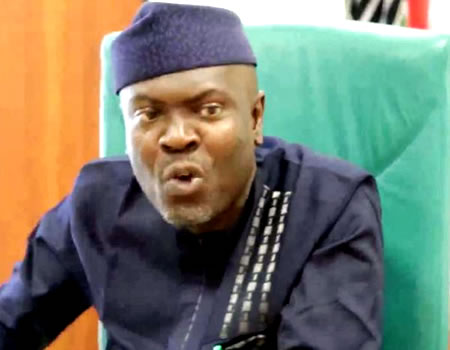 ONE of the primary functions of the legislature is appropriation. In the engagement with the Ministries, Departments and Agencies (MDAs) so far, can you say you have been critical enough to ensure that resources not well appropriated are readjusted, so as to disabuse the minds of Nigerians who perceive the National Assembly as a mere rubber stamp?

The power of the purse led and resides constitutionally with the National Assembly because this country functions on constitutionalism and the grand norm is the 1999 Constitution. So, it’s constitutionally positioned to ensure that there’s a balanced proposal between the executive and the legislature; it is very important. Something fundamental that we discovered as representatives of the people in the current budget is that so many projects were christened, classified or named as ongoing, whereas those projects are not ongoing; they are fresh projects. How do you put into a budget that  the president came to read on the floor of the National Assembly projects that are not yet conceptualised and you call it an ongoing project? That is quite misleading. When you say a project is ongoing, then it means you are also supposed to bring about 90 per cent of the project is 2019 to 2020. That was never done. They left out almost all the ongoing projects of 2019 not captured in 2020 and they named new projects as if they are ongoing projects. That again is an infraction on the law of the budget.

Many of the ministries are doing what I call financial calamity; infrastructure imbroglio and it’s really disturbing. So if we are not working as parliamentarians, we wouldn’t have discovered this. And that is not good and not healthy for the economy of the country. And I think the president just has been misled. So, we as a people representing the people owe it a duty to ensure that we fix the gap, ensure that the 2019 ongoing projects are captured. For instance, the project that was in the Ministry of Niger Delta is an ongoing project but it did not reflect so; new projects were made to be seen as ongoing projects, amounting to N500 million, N200 million and N1 billion for projects that are new in the ministry. So, what we need to do as parliamentarians is to go back to 2019; check all the ongoing projects and see whether they are there, but they are not there. If a project that we have in 2019 that ought to be ongoing in 2020 are not there and you brought a fresh project and said they are ongoing, then it’s quite misleading.

Why 3 p.m. is best time for couples to make love — Hormone experts

To what extent are you satisfied with the performance of the MDAs during the 2020  budget defence?

The budget is an aspect of our law to tackle the problem of our people from the sociological perspective of law-making.  So, the question is, what is the success index of the budget 2019, vis-a-vis, tackling the challenges of our people? Well,  it’s clear that we’ve not been able to increase the capital disposition of the budget for more than 30 per cent, and that’s a far cry from what is expected that the budget should be implemented close to about 100 per cent. So, this is just barely 30 to 40 per cent of the capital outlay for 2019.

Then, how do we reconcile that with tackling the challenges of our people, which is the budget is set to achieve? If you rate that visa-vis the performance, you will want to say that nothing extraordinary has been done, especially when you look at the debt servicing profile of the budget which took about N3 trillion of the 2018 budget. The recurrent profile of that budget is about N4 trillion; the total budget is about N8 trillion. Then, what do you say about that when you use the better part of the budget to service recurrent, to service debt and then the little part goes to capital? That is why our roads are in bad shape.

And don’t forget that part of the money will be filtered away by some elements through corruption here and there. So, what do we see from 2019 to 2020? What do you expect from a government that has not really shown enough capacity to what I call creative and social engineering?

How does the budget work for our people? Nothing extraordinary has been done so far. What is going on is funny to me. You want to return some money to the Yola Disco, about N25 billion. There are some aspects in the 2020 budget that is good. For instance, I saw so much money going into the pension. Of course, when you work for a  country that is driven by social orientation for 35 years, you will want to ensure that you pay their pension.

So, I saw that being captured reasonably and that will be a good one if we can get money to service it. But come to think of it, if I  get just N250 billion assigned to tackle infrastructure and then our infrastructural need is between N1 trillion and N3 trillion, that shows you have to continue to service old roads. However,  before their completion, those roads are  already bad again. So how do you reconcile that situation?

We depend on just those old roads; we don’t have the rail working effectively. The inland waterways are not working effectively. The budget is not about the people in the Presidential Villa or the Presidency. The situation is not that those in charge don’t know the problems of the country. I  think the problem is that they are just being overwhelmed.

They don’t get creative enough to understand how to resolve the problems. So, it’s disturbing when you see a budget not really critically tackling those issues. If it is one road we can fix in the whole nation, we can devout the entire money to it but all the roads are almost in a state of dilapidation. So, I think there’s the need for us to be more creative in our approach to whatever money we are allocating to the challenges and then, we’ll begin to track whether we are making progress along that line.

This is a festive season and you’re talking about the roads. What do you think the government should do?

There is usually medium and long-term approaches. The approach should be in form of palliatives now since we can’t fix the entire road and people will be crisscrossing the country. And maybe, there’s need to empower and enable the  Federal Road Maintenance Agency (FERMA) to look at those critical areas to at least patch them in the interim because of the challenges of traversing the country during the festive period. This is also because we know that the festive period will come even from January when we have our budget running to do something that can show that there is an element of government and governance in terms of responsibility. Of course, don’t forget that the money we are also spending is the taxpayer’s money; return something back to them to make it look as if democracy is working.

Prohibition of retired judges from legal practice: Need for a paradigm shift (2)