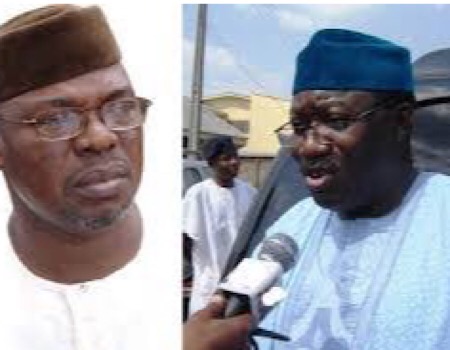 Share
Worried by the lingering cases of insecurity in Ekiti State, former governor and candidate of the Social Democratic Party (SDP) in the June 18 governorship poll, Chief Segun Oni has advised Governor Kayode Fayemi to deploy his expertise in war studies to tackle the senseless killings, kidnappings and heinous crimes in the state.
The former governor spoke on Wednesday during his familiarisation visit to the party members in Oye, Ikole, Ekiti East and Gbonyi local government areas of the state ahead of the election.
The SDP candidate who charged the people to get prepared for the task ahead said, “God willing, SDP will govern Ekiti and Nigeria after winning the governorship and presidential election, so be prepared because a serious matter must demand a serious approach.”

On the rising cases of kidnapping in the state, the SDP candidate said the issue has become a serious war against the state and the nation, which must be tackled with all seriousness.
According to him, “I am calling on governor Kayode Fayemi, PhD War Studies, to use his knowledge to tackle kidnapping in the state. Kidnappers have declared war on our people, this has been going on since about four years ago and it has not ceased. As an engineer, I will fix any engineering problem facing the state.
“He should not only chase them away but arrest them and bring them to book. This, he should do before do October 16, 2022, when he will be leaving office to justify the mandate the people gave him four years ago.”
He urged the electorate not to surrender their voter cards to anybody saying, ” you must secure it to vote for good governance, freedom and use it to send them away.”
Also speaking in Efon, Ijero and Ekiti west local governments, Oni, urged the SDP members to begin door-to-door campaigns and mobilisation across markets and farmsteads to sensitise the people to vote him on election day.
Oni described the People’s Democratic Party, regarded as a major opposition in Ekiti  as a dead party  that will be buried on June 18, saying, “the party is dead we will only do the funeral with this coming election.”
The former governor assured that he would utilise the little resources accruable to Ekiti to develop the state the way he did during his first term.
He said there is no magic in governance, adding that all government programmes, including infrastructure and human capital development, will be attained if a leader can refrain from corruption and make the right sacrifices.

In spite of the huge investment in the water sector by the government and international organisations, water scarcity has grown to become a perennial nightmare for residents of Abeokuta, the Ogun State capital. This report x-rays the lives and experiences of residents in getting clean, potable and affordable water amidst the surge of COVID-19 cases in the state…Deploy your degree  Deploy your degree

The Lagos-Ibadan railway was inaugurated recently for a full paid operation by the Nigerian Railway Corporation after about a year of free test-run. Our reporter joined the train to and fro Lagos from Ibadan and tells his experience in this report…Deploy your degree  Deploy your degree

BNXN is a boost to my career, says Tomide aka Bayarn