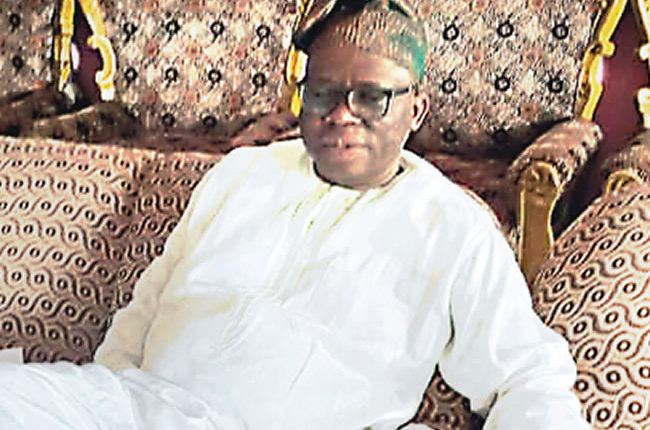 As part of efforts to strengthen historical ties, the representatives of Olu-Oje descendants from all southwestern states visited the Onpetu of Ijeruland, Oba Sunday Oladapo Oyediran, in his palace recently. YEJIDE GBENGA-OGUNDARE report the relevance of the interaction.

In order to put history in perspective and locate the Olu-Oje family in their pride of place among the Yoruba people, the descendants of the Olu-Oje family from Ile-Ife are aligning their history to gather their children from all states of the South-West where their forebears had settled, in order to foster unity.

Key representatives of the descendants visited the Onpetu, Oba Sunday Oladapo Oyediran, as the traditional head of the Olu-Oje lineage at his palace in Ijeru to further discuss issues relating to the Olu-Oje descendants.

According to history, Adeori, the forebear of the Olu-Oje had ascended the throne of Onpetu in Ile-Ife before the death of Oduduwa as he had previously received his crown, the opaga title bead and blessing from Oduduwa to found his own town like his contemporaries. But he stayed with his aged father as Onpetu Ido at More, Ile-Ife, while his son, Olu-Ominniminni set up with his huge followers at Ipetu Ife, from where he moved to Ipetumodu.

The descendants claim that the origin of Onpetu kingdom dates back to time immemorial, even before the arrival of Oduduwa to Yorubaland and the Onpetu as the head of Olu-Oje dynasty is a traditional stool that goes way back in history.

Corroborating the claim, Oba Oyediran stated that, “We had Onpetu of Ife before it was changed to Olojudo of Ife and Onpetu of Ijeruland. We migrated from Ile Onpetu in Ife to establish Oje kingdom near Ogbomoso area and up till now the Onpetu is head of Ido community in Ife which has also produced Oonis. The Olu-Oje comprises of Onpetu, Olojudo in Ife, Olu Oje of Abeokuta and Gbogan in Osun state.”

He explained that Oje market in Ibadan is synonymous with Onpetu and also as old as Ibadan itself, adding that, “If Oje is named after the descendant of Onpetu, we should begin to visualise where Onpetu is coming from. We settled in a vast portion of land between Olugbon, Aresa, Onikoyi and Oluwo, Onpetu settled in-between the lands; these are our boundary men.”

The Onpetu of Ijeruland as the head of the Olu-Oje kingdom across the country consequently summoned his kinsmen from wherever they might have established kingdoms across the South-West and across the country at large, to trace their roots in order to reunite and also for them to foster development.

He explained further that, “people would have heard about the rift between the Olugbo of Ugbo kingdom and Ooni of Ife where the former said Oduduwa met him in Ile-Ife and that he owned Ile-Ife. I can tell you that Onpetu was also in Ile-Ife and the head of Ido settlement; he controlled the territory. Communities like Ido, Ikorumu, Ideta Odin, Iloran, Imojubi, Iraye and others were in existence before the arrival of Oduduwa.”

He added that Ooni took over after the demise of Oduduwa as someone holding brief because there was no laid down procedure on how a new leader would emerge and since there were other known traditional rulers within and around Ife, they decided to appoint Oduduwa as ‘Arole’, which means temporal.

“History told us that before the death of Oduduwa, Alaafin had migrated outside Ife in an attempt to establish a new kingdom for himself. When Oduduwa died, he came back to claim his own inheritance, unfortunately for him they had completed the sharing of all the inheritance left by Oduduwa and the only thing left for him was just a piece of land. They instructed him that he could go to his brothers to see if they could share from the royalties they collected from their lands and if they could not, so be it.

“When Alaafin was leaving, a crown was taken from Olufon, an Obatala worshipper, and that is why in the etymology of Alaafin, it reads ‘lade lade lade won so wipe Alaafin o lade, ade aladinku la gba fun Alaafin, ade sese efun ni’; it is in their cognomen till tomorrow. His crown came from aladinkun which are the Olufons, the adherents of Obatala. If we are to arrange them are they supposed to be the most prominent?’ Oba Oyediran said.