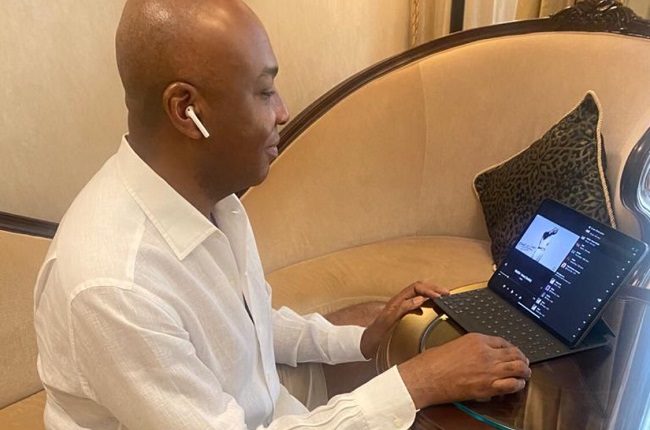 Fans of Nigeria’s hip hop stars, Davido and Wizkid attempted to drag former Senate President, Dr Bukola Saraki into a renewed superiority battle on Friday after the former number three man in the country commended Wizkid for giving Nigerians what he described as a “brilliant album”.

No sooner than the former Kwara State governor tweeted about the album than fans of the two music stars swooped on his timeline queried Saraki’s endorsement of Wizkid’s Made In Lagos album, a gesture which was not extended to Davido when he dropped his ‘A Good Time album’ in 2019.

“Wizkid’s #MadeInLagos is a brilliant end to what has been a long and eventful month for all of us. Currently vibing to my favourite track on the album #Grace”, Saraki had tweeted.

As reactions continued to trail Saraki’s tweet with a section of Twitter users who are loyal to Wizkid throwing shades, Davido’s camp kept mute as many people expected a response from them.

While some people were quick to disregard Saraki’s tweet, describing it as a subtle plot to remain relevant ahead of his next political ambition in 2023, others commended him for relating with music fans and showing his other side as well.

But a large percentage of responses under the tweet said the politician should stay out of the ‘cyber battle’.
Reacting to a fan who asked him if he was team Wizkid or Davido, Saraki said Davido has been like a son to him while Wizkid and other young Nigerian artistes have kept pushing the boundaries.

“Over the years, @Davido has been like a son to me. He, Wizkid and other young Nigerian artistes keep pushing the boundaries in our entertainment sector and making all of us proud! I also can’t wait for David’s album to drop next month,” he said.

The All Progressives Congress (APC) has told a Federal High Court in Abuja, that the Comrade Adams Oshiomhole-led National Working Committee (NWC) was sacked to solve the internal leadership crises rocking the party.Davido is a son  Davido is a son

The party also said that immediately the Caretaker/Extraordinary Convention Planning Committee was put in place after the NWC’s dissolution, the crises that had characterised its affairs were laid to rest.Davido is a son

The Emir of Zazzau, in Kaduna State, Alhaji Shehu Idris has died in his palace at the age of 84.Davido is a son

His son, Aminu Shehu Idris, confirmed in an interview with the Tribune Online that his late father who was appointed on 15th February, 1975 and spent 45 years in the throne died on Sunday after a protracted illness.Davido is a son