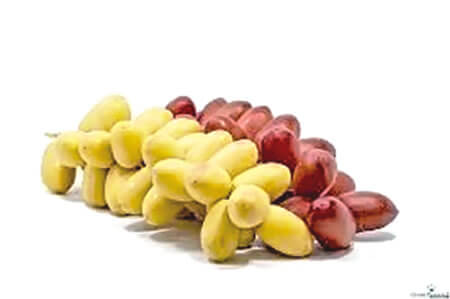 Biting through the paper-thin skin of dates to the juicy sweetness of the flesh beneath, it seems impossible that anyone would not appreciate the wonders of these delicious dark fruits.

There are at least 30 kinds of dates that are found around the world and they fall under three broad types – soft, semi-dry and dry. Te differentiation is made according to the glucose, sucrose and fructose content.

Dates palm is known to have come from what is now Iraq. In Nigeria, the dry and soft date fruits are sold out for consumption. However, in the northern part, they are added to the locally brewed alcoholic beverage to help reduce the intoxicating power.

Dates are a good source of energy and vitamins and important elements such as phosphorus, iron, potassium and a significant amount of calcium. It is also rich in phenolic compounds possessing free radical scavenging and antioxidant activity.

Although dates are sugar-packed, many dates varieties are low GI diet and refutes the dogma that dates are similar to candies and regular consumption would develop chronic diseases.

Dates fruits atre listed in folk remedies for the treatment of various infectious diseases like cancer and has been demonstrated to show immunomodulatory activity.

Besides, studies have shown that the various parts of its plant are widely used in traditional medicine for the treatment of various disorders which include memory disturbances, fever, inflammation, paralysis, loss of consciousness and nervous disorders.

Also, in traditional medicinal practices, dates are used to enhance fertility in men and women and as aphrodisiac.

In recent years, an explosion of interest in the numerous health benefits has proved it capable of boosting brain power and ameliorating some brain damage.

Scientists at the Food and Nutrition Department, King Abdulazziz University, Jeddah, Saudi Arabia, found that dietary supplementation with dates have an enhancement effect on mood and cognitive performance.

The 2015 study examined the effects of dates on the cognitive performance and mood on 15 healthy individuals that had 250ml of dates. This is equivalent to about six to eight dates.

These were people not taking any prescription or over-the-counter medicines. They were not using illicit/social drugs or any herbal or dietary supplements. However, all participants abstained from smoking and caffeine-containing products on the day of testing.

Findings in the Alexandria Science Exchange Journal show that dates can significantly modulate many facets of mood in healthy young adults.

In this trial, participants were more alert, calmer and more content after taking dates fruit juice. The main enhancement in the cognitive tasks was noticed in the reaction time on numerous memory tasks.

Also, there was a trend towards an improvement in the percentage of accuracy (the correct responses) in the task of list recognition.

The scientist based on the finding reasoned that the modulation observed  in  mood in  the  study  might  be  attributed to the high content of sugars  and amino acids in dates fruit.

An important association has been reported between mood and iron status in healthy subjects. Therefore, food supplements rich in iron may have a positive effect on mood.

Dates fruit can be considered as a practical supplement of iron; thus there may be an association between mood changes and the quantity of iron in dates fruit. The study, however, suggested that dates fruit may eventually have a role to play in the enhancement of mood and cognitive performance in a larger trial and with different doses.

The implications of these results are that modulation on mood after the consumption of dates fruit may be beneficial in the treatment of mood irritability caused by conditions such as Alzheimer’s disease or in menopausal and premenopausal conditions in women.

Moreover, dietary supplementation with dates improves age-related memory decline and cognitive dysfunction observed in neurological diseases such as Alzheimer’s disease in the laboratory.

Alzheimer’s disease (AD) is characterised by a progressive loss of cognitive function. It is the third leading cause of death after cardiovascular disease and cancer and affects more than 25 million individuals worldwide.

According to a 2015 study published in the Journal of Ayurvedal and Integrated Medicine, scientists found that it ameliorated the decline in spatial memory and learning ability in Alzheimer’s disease induced in animals.

According to them, “given that increased anxiety is a problematic symptom of human AD patients, the date diet may represent as an adjunct treatment to reduce anxiety symptoms in AD.”

Currently, scientists in a new study published in the 2016 edition of Cell Journal stated that dates consumption has beneficial effects on reducing the damage by injury on the brain.

Meanwhile, studies have shown that eating dates fruits on a regular basis promotes longevity and reduces the risk of heart disease and cancers and is beneficial to pregnant women.

Researchers in the Journal of Obstetrics and Gynaecology in 2011 titled, “The effect of Late Pregnancy Consumption of Date Fruit on Labour and Delivery”, found that consumption of dates fruit in the last four weeks before labour significantly reduced the need for induction and augmentation of labour, and produced a more favourable, but non-significant, delivery outcome.

The world inside Kirikiri Medium Prison

How to prevent hair breakage

What to know about high cholesterol

7 best ways to protect your home from mosquitoes