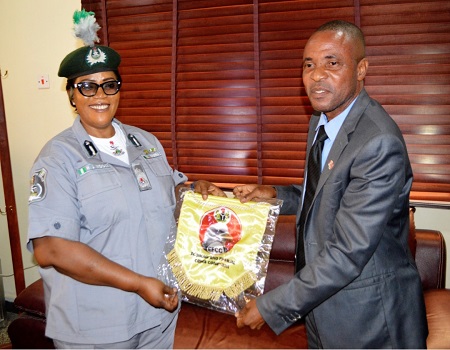 The Nigerian Customs Service (NSC), has commended the Economic and Financial Crimes Commission (EFCC), for its spirited effort towards ridding Nigeria of economic sabotage.

The Service gave the commendation on Tuesday, February 25, 2020, when the new Comptroller of Customs in charge of the Oyo/Osun Command, Helen Ngozi, paid a familiarisation visit to the EFCC’s Ibadan zonal office.

Ngozi, who was accompanied by senior officers of the Command, remarked that the EFCC possesses a galaxy of highly skilled officers, whose display of professionalism has helped in plugging leakages that could have led to huge loss of resources for the country.

“The EFCC parades high-quality staff who are efficient in investigation and prosecution of economic and financial crimes of various forms. It also has sophisticated equipment used for intelligence gathering. The EFCC provides the main backing for economic stability through its control of economic sabotage in and outsides the country.

“Your agency has a history of playing its statutory role of investigating and preventing economic and financial, and, therefore, helping to combat security challenges,” she said.

While seeking further collaboration with the anti-graft agency, the NCS boss noted that the existing synergy between the two organisations has brought about many successes in the fight against economic and financial crimes.

In his response, the acting Zonal Head of the EFCC Ibadan office, Bright Igeleke, recalled that the ties between the two agencies dated back to the early days of the EFCC when officers of the NCS were seconded to the Commission to help in its effective take-off.

“Our Commission has come a long way in its mandate of combating economic and financial crimes. But the success story cannot be complete without the mention of the input of officers seconded to the Commission from the Customs Service as part of its inaugural team,” he said.

He also called for prompt and effective intelligence sharing between the agencies in order to further help each other in their individual mandates.

We are making huge stride against terrorists in North East ― Buratai