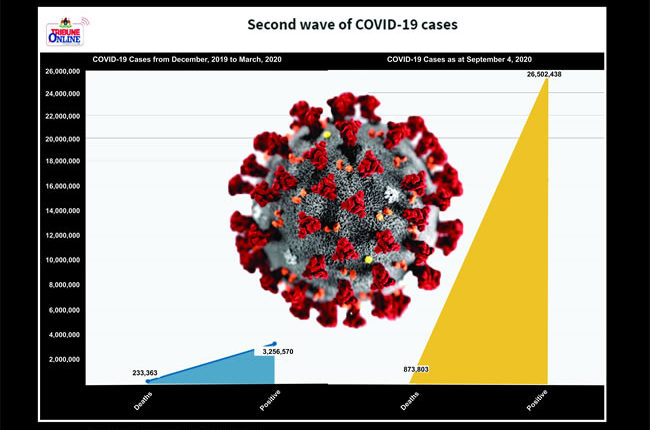 The spate of the deadly coronavirus pandemic surged from over three million cases in April to over twenty-six million cases in August. But while it is still increasing in some parts of the world, the infection rate, according to the figure released by authorities daily, is reducing in Nigeria. Hence, the indifference of Nigerians has grown. IMOLEAYO OYEDEYI examines whether this won’t likely spark the second wave of the virus and its peculiarities.

In nine months, the coronavirus pandemic has claimed no fewer than 915,070 lives and infected 28,410,527 people in 213 countries and territories around the world as of Thursday, September 10, 2020, according to the World Health Organisation (WHO).

In the first four months of the virus outbreak, the world recorded 3,256,570 confirmed cases with 233,363 casualties according to figures obtained from Johns Hopkins University (JHU), Baltimore, Maryland, in the United States. But in the last five months beginning from May 1, the entire globe has witnessed 23,245,868 cases and 640,440 fatalities. Of the past five months, June and July were the staggering spots where the spate of the virus surged exponentially.

With the shocking rise in the wave of the virus, WHO warned in July that the world was facing a resurgence as the pandemic continued to accelerate with cases hitting a new daily high of around 300,000 globally on July 27 and more than half occurring in the United States which alone has been reporting a seven-day average of 67,000 cases since July 21.

According to NewScientist, an online science-based website, “The coronavirus is also spreading rapidly in Asia too as on July 26; China where the virus outbreak began saw its highest number of daily cases since March. Worldwide, the cumulative number of cases has roughly doubled in the past six weeks.”

But despite having just 1.2 billion people out of the 7.8 billion population of the world, Africa is said to be witnessing a fast acceleration of the deadly virus.

The WHO, relaying the recent upsurge, said: “The pandemic is accelerating in Africa – it took 98 days to reach first 100,000 cases and only 18 days to move to 200,000 cases. Ten out of 54 African countries have been driving the rise in numbers, accounting for nearly 80 per cent of all the cases. More than 70 per cent of the deaths are taking place in only five countries: Algeria, Egypt, Nigeria, South Africa and Sudan.”

Having recorded the first outbreak of the virus on February 14, the spate of the virus in Africa has risen from a low level to an alarming rate, soaring over 400,000 as of July 6.  According to figures obtained from Johns Hopkins, by September 10, the total confirmed cases of the virus in the black continent have tripled to 1,336,407 with 32,178 casualties. South Africa tops the Africa COVID-19 charts with over 50 per cent of the total figures for the continent translating into 644,438 confirmed cases with 15,265 deaths; Egypt is second on the table with 100,557 confirmed cases and 5,590 deaths while Nigeria comes fifth with 55,829 confirmed cases, 1,075 fatalities and 436,231 samples tested across the country.

Though epidemiologists have previously warned that each time suppression measures are relaxed, there is likely to be a pattern of rising transmission and temporary restrictions in response, the Federal Government decided to extend the second phase of the eased lockdown by one week on Monday, July 27. By 11.00 p.m. on Thursday, September 10, the country had recorded 53,027 confirmed cases and 830 deaths. There were 131 days between May 4 when the eased lockdown commenced and September 11, but the country witnessed no fewer than 53,027 confirmed cases and 779 deaths, over 817 per cent increase which are bigger than what the country witnessed in the previous 68 days.

According to the Nigeria Centre for Disease Control (NCDC), the country recorded 60 per cent of its total COVID-19 cases in June alone, including the highest number of deaths. But it seems the Presidential Task Force (PTF) on COVID-19 had seen this coming.

The PTF chairman and Secretary to the Government of the Federation (SGF), Boss Mustapha, in view of this spike recently said: “One significant observation the PTF wishes to make is that new rise in cases are expected as nations start to ease restrictions. We shall, however, proceed with caution and we shall not hesitate to change course when the need arises. What this means is that Nigerians should never mistake the relaxation by the government as a signal that the COVID-19 battle had been concluded”.

According to The Guardian of UK, the term ‘second wave’ of the coronavirus has no conventional scientific definition, but has been used to mean anything from localized spikes in infection to full-blown national crises.

Meanwhile, in spite of many experts’ claims that the Asian power nations – China, Hong Kong and South Korea – are already battling with the second wave of the virus having flattened the first wave and recorded no new infection in three weeks, a specialist in infectious disease at Johns Hopkins Medicine, Lisa Maragakis insists that the world is still witnessing the first wave of the coronavirus.

She said, “As communities begin to reopen, people are understandably eager to be able to go out and resume some of their regular activities. But we don’t yet have an effective therapy or vaccine, so the reopening is intended to take place safely while maintaining social distancing, and masking and hand-washing.”

“When an area relaxes social distancing guidelines and reopens; the effect of that change might take a month or more to be seen. Of course, surges after reopening also depend on the behavior of the people when they start moving around. If everyone continues to wear masks, wash their hands and practise social distancing, reopening will have a much lower impact on transmission of the virus than in communities where people do not continue these safety precautions on a widespread basis,” she added.

Threat of a second wave

However, some experts have argued that for any cluster of the second wave of the coronavirus to grip the world, its current first wave has to end after which a new strain of the virus will develop. But with still a lot unknown about the virus, some believe that its next wave may be unpredictable which will make it harder to control, especially because people are getting tired of social distancing.

But the Head of Paediatric Infectious Diseases Unit and Chairman, Epidemic Response Committee at the Ahmadu Bello University Teaching Hospital (ABUTH), Zaria, Kaduna State, Dr. Umar Lawal observed that since the virus is yet to be fully understood, it is foolhardy to confidently predict any peculiarity of its second wave as the virus remains the largest pandemic that will clutch the world since the 1918 Spanish flu that prevailed a century ago.

“COVID-19 and the Spanish flu may not be comparable drawing from the huge difference in global population size and dynamics, as well as medical advancements, but a big lesson from the Spanish flu is the fact that it had a second wave which lasted longer and witnessed higher transmission rates and resultant death tolls than the first and third waves. COVID-19 pandemic is still evolving, albeit with different magnitudes in different parts of the world, putting some countries and regions ahead of others in the control of the outbreak,” Lawal said.

He stressed that the end to a wave can only be possible after attaining a period of greater than two incubation periods of an infectious disease outbreak in a particular region which, he said, translates to between 28 and 30 days in the case of COVID-19.

“In some markets within Beijing districts in China, for example, the authorities reported a first case of COVID-19 on June 11, 2020 after over 50 days of witnessing no case from the place. Following the discovery of this case, further investigations revealed that transmission has already occurred to some 50 people that visited the market and these in turn spread the disease to more people in their residential neighborhood. This incidence was appropriately considered as a “second wave” as it came after a period that doubled the maximum incubation period for COVID-19,” he said.

When asked whether Nigeria with its worsening spate of the virus is on the cusp of the second wave, Lawal said, “Not exactly; I say this because the way the events are unfolding in Nigeria, we may never really reach a clear-cut point when our authorities could be in a position to declare the end of a ‘first wave.’ The fact that lockdowns are being eased in the country is not necessarily because transmission has been curtailed, but perhaps because lockdowns are not sustainable, especially since the government cannot cater for the needs of majority of her citizens most of who live below the poverty line.”

He added that, “As not enough testing is carried out to detect new cases in Nigeria, the country’s curve of the epidemic has neither reached its peak nor even descended towards becoming “flat”; so it may not be appropriate to declare as yet that the first wave is over or to even speculate on a second wave.”

While reacting to a recent study from the Cambridge University that posits that if everyone wore a mask all of the time, it could prevent a second wave of the virus from happening in the next 18 months, Lawal said, “It is important to note that in any infectious disease outbreak, it usually requires the adoption of a combination of preventive measures to achieve control. Therefore the use of face masks alone by everybody will not be enough to stop transmission, assuming that everyone is using masks correctly and consistently, unless other measures are simultaneously applied.”

He stressed that, “Social distancing and consistent hand and respiratory hygiene are also very useful strategies individuals must adhere to in a bid to curtail the spread of COVID-19,” adding that, “Where the use of face masks is not correctly and consistently done according to standard guidelines, chances are high that the spread of the virus will continue within the community.”

When asked whether the growing indifference of Nigerians occasioned by the decreasing spate of the virus in the country will likely spark its second wave, Dr. Lawal said he doesn’t see the possibility of the country experiencing a second wave of the virus because even the first wave has not yet reached an all time low rate.

He stressed that with the growing indifference of Nigerians to the spread of the virus, the country  might likely witness another surge in the first wave especially as it has now opened her airports through which more infected entrants can made way into different parts of the country.