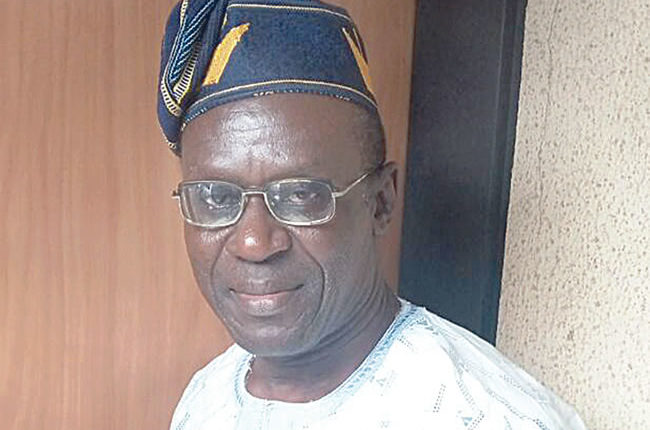 Former governorship candidate of the Labour Party (LP) in Lagos State, Dr Rotimi Olulana, speaks on issues of national interest, in this interview by BOLA BADMUS.

The ruling APC is going through some crisis now, which has led to the sack of its national chairman, Comrade Adams Oshiomhole. Did you ever foresee that development and what does it portend?

A section of APC leaders are at loggerheads over appointments made by the government, which they consider unfavourable to them.

Let me be sincere with you, the Buhari presidency is a kind of manipulative leadership. But one reason one cannot really blame the president is because he is not in control of the government, which is very sad. He is not the same Buhari we had in 1983-1985. So, for me, I look at it as a situation where you can always say why should we allow an aged man to continue to be the leader of this nation? It is wrong because when you look around the whole nations of the world, young people are leaders.

So, the crisis within the party today emanated from such situation because there are various demands and expectations and the man who is supposed to put things right for the party is not doing it. Some people are working, trying to manipulate him and whatever they ask him to do is what he will do. He is not in control. The people who are ruling you are different from the man in the seat, and that is affecting every segment of his government, and, therefore, the crisis you see in the ruling party.

Let us look at the security situation in the country right now. The government will always say it is in charge, whereas there have been reported killings, kidnappings, among others, which made the northern governors to gather together and call on the Federal Government to shut the borders against herders from neighbouring countries…

As far as I am concerned, Buhari’s government has failed totally when it comes to the issue of security. You know that the security of the people should be of key concern to every government. I may say he has succeeded and tried in some areas. Security is of paramount importance in every society. If there is no security of lives and properties, then what do you get? Before he got to power, we all knew what was going on about Boko Haram. The herdsmen issue was not really known then. But immediately he became president, the issue of herdsmen came to the fore and it has now taken over everything.

If I were the chief security officer, I would have resigned. If you demand instrument of office but you cannot handle it effectively, the next thing is for you to resign. It is also time for the military service chiefs to come up with the truth of what they are facing, to tell the nation what really are their problems or challenges.

What do you think Buhari should have done to address this issue?

He is supposed to know that the service chiefs are due for retirement, because if I were him, I would have[changed them] long ago, once I discovered that the people are complaining, and I have called them aside, held series of meetings with them to gear them up to take up their responsibilities and they are not doing so. The truth is that, the security network of the country is ineffective.

The economy has been badly affected as a result of the pandemic, what do you think the government can do to revamp the economy post-COVID-19 as some people are talking about reviving agriculture, among others?

Let me be sincere with you, if the government is talking about agriculture, it is a good venture and it is one of the best areas for government to focus attention on. But our government has failed to take the bull by the horns.

When you are talking of the economic development of every given country in the world, it is a private sector-driven economy that can make a country to succeed, not when the government is totally in charge. The business of government is to provide a conducive environment for businesses to thrive, but our own government has succeeded in killing the economy totally because the private sector businesses are closing down in every area. Can the government alone employ the whole citizens of a nation? No! The private sector-driven economy is the only economy that can be successful. But our own system of operation is totally wrong, go and look at the banks today, I just want to give you a little of what I know is going on that the government is not focusing attention on.

The Edo governorship election is next week, but before then, the sitting governor, Godwin Obaseki, has quit APC to join the leading opposition PDP on whose platform he will contest the election…

The truth there is that it has always been like that, for someone to dump one party and jump to another one any time, you may see him returning to the same platform he earlier dumped or he may decide to float his own party by himself. All this rigmarole is common in our kind of politics in Africa, most especially in Nigeria. Our kind of system is so bad that there is no dignity and honour. Many Nigerian politicians have no honour. They don’t have honour for themselves and their focus is all about their personal well-being.

But Obaseki was denied participation in the APC primaries and that is the reason he had to dump his party, don’t you think he has his own point?

Yes, he has his point. At every moment in this life, every human being that takes a position on any issue has a reason. That’s his own reason, but I will tell you that thousands of other people have other reasons to move from one party to the other. But, I am a different person.

Let me tell you, in Nigerian politics, they outsmart each other. I can’t be a governor in a state and somebody would say he wants to throw me out of the system from the party that brought me to power so that I would be frustrated to go and join another party. I don’t think it can happen to me, I don’t think so.

It is wrong for somebody to jump from one party to another. It shows that there is no ideology and no integrity. It is unfortunate that even today, the way and manner some people become governor is not ideal. In the olden days, people who became governors, senators or ministers were trained politicians under certain leaders. There would be a leader who had been leading like Chief Obafemi Awolowo, especially, during the first and second republics.

Now, the highest bidder may know nothing about how people have been working and toiling for the party. To me, what I have been experiencing is ‘anything goes’ and this is not what we met while growing up. You honour your leader, that is what I met.

What is your view on the Lagos East senatorial poll coming up soon, following the recent death of the incumbent, Senator Bayo Osinowo?

It’s very unfortunate that the man died. Nobody will live forever. Everybody has a date with death. I pray that God will take care of his family.

There are a lot of people out there in the senatorial district that will come out for the election in the several parties out there. However, the truth is that we have three major parties, namely APC, PDP and the Labour Party. But the truth also is that the APC has its grip on Lagos. I don’t see PDP winning Lagos at all because they are not cohesive. They are not working together. And if a party is not working together, if they are always in crisis, there is no way they can win any election. It’s only a party that works together that can always make a headway.

We have 80 per cent of Edo electorate behind us —Obaseki