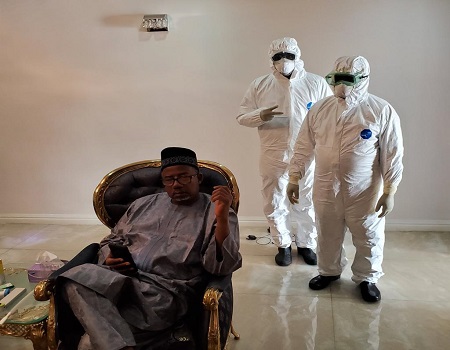 Unconfirmed reports have it that Bauchi State Governor, Sen Bala Mohammed Abdulkadir, has tested negative after completing the first round of treatment for COVID-19.

Though the story is trending in the social media, as at the time of filing this report, no official statement from the government unlike in the past when such information was broken with dispatch.

The unconfirmed report had it that one of the top government officials brought in the result of the test from the NCDC office in Abuja which indicated that the governor has tested negative of the COVID-19 infection.

A call put through to the Commissioner for Health, Dr Aliyu Maigoro Mohammed, was not picked while the Executive Chairman of BASPHCDA, Dr Rilwanu Mohammed, dropped his call after hearing the voice of this correspondent.

It was, however, said that the news will be broken officially tomorrow when the governor is expected to come out of isolation to address the people of Bauchi State.

It will be recalled that earlier Saturday morning, it was disclosed that Bala Mohammed Abdulkadir who tested positive to COVID-19 infection is responding positively to treatment as he is doing well.

The disclosure was made by the Chief of Staff (CoS), Government House, Bauchi, Dr Ladan Salihu who accompanied medical personnel to see the Governor in his isolation centre where he is presently receiving treatment.

Ladan Salihu in a tweet posted in his verified handle wrote that “I saw Gov Bala Mohammed, currently in isolation. He was examined by his Doctor who confirmed all his vital signs are fine. In sha Allah our governor will overcome this adversity.”

From the tweet, it is very clear that the governor is recovering speedily and his sample will be taken for the final test in order to confirm his healing status.

The State Deputy Governor, Sen Baba Tela, who is the Chairman of the State Rapid Response Taskforce on COVID-19 and Lassa fever had during his briefing to Journalists on the update of the COVID-19 situation in the state declared that his Principal will soon be out of isolation considering the fact that he is responding well to treatment.

Baba Tela added that Bala Mohammed has not shown any symptoms of the infection despite testing positive assuring the people of Bauchi State that they will soon welcome the governor back to duty.