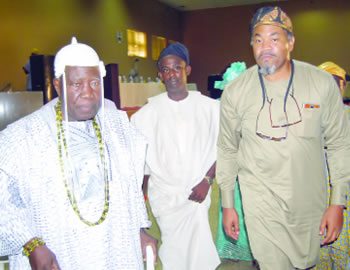 The Kakanfo Inn in Ibadan came alive on Sunday, May 29, when people from diverse walks of life came together with the Olubadan of Ibadan land, His Imperial Majesty, Oba Saliu Adetunji, Ogungunniso 1 to chart a new course for the development of Agriculture, entrepreneurship, commerce and services in the Yoruba Society. TUNDE OGUNESAN reports.

That the economic situation in the country needs urgent attention is no more news to the people as the country can no longer depend on oil for sustenance based on the myriad of challenges facing the country; bickering and internal

politics, resource control and pipeline vandalism. For this reason, friends of the palace and other stakeholders came together to deliberate on ways to re-engineer and re-produce the consciousness of a South Western business group in today’s youth in a programme tagged, “Lunch with Olubadan”. The sitting came up with techniques of moving the south west forward agriculturally with the aid of a “Yoruba practical farmer” to share from his world, how he has been able to use agriculture to sustain himself and create a viable business.

First to bell the cat was the facilitator of the programme, Chief Babajide Ayoade, who stressed the need for the Yoruba to come together and collectively channel a new economic course for the region through agriculture.

According to Chief Ayoade “This programme is part of our contribution to contribute our own course to the economic development of Yoruba nation. It was targeted at brainstorming on the way forward for the Yoruba people in the face of the dwindling economic fortunes being experienced in the country.

“You will agree with me that apart from the economy of our great country that has continually call for diversification, the Yoruba need to urgently find a way of being contributors not managers of Nigeria’s economy, and the only way to do that is to go back to our best, which is agriculture. Farming is our business, we understand it and that is what we know how to do best. With this, we can really position ourselves as a veritable option for the diversification of Nigeria’s economy.”

Ayoade further called for the diversification of the nation’s economy through agriculture, adding that it was the only sustainable, profitable and economic-propelling sector.

In his charge, Prince Raimi Adetunji, on behalf of the Olubadan, called on Yoruba sons and daughters to return to agriculture in the face of the lingering economic downturn.

Oba Adetunji revealed that the Yoruba region had, in the past, blossomed with Agriculture as the major source of its economic earnings, describing it as a great source of livelihood bequeathed unto them by their forefathers.

He noted that past leaders of the region had also achieved tremendous infrastructural and socio development because they embraced agriculture with their utmost desire to transform the region.

He stressed the need for the Yoruba people to collectively return back to their farmlands, which he said was more profitable and comfortable in the face of economic crisis.
“We must collectively ensure that the region does not go backward. We are known for playing the pacesetting role in all. We have a rich culture, tradition that is cherished across the globe.
“We are known for being creative, knowledgeable, hardworking, honest, accommodating, enterprising, and with the display of high level of morals and humility. All these are virtues bequeathed on to us by our fore fathers as what the

Yoruba culture and tradition teach and upheld,’’ he said.
The Chief Executive Officer, Thelma Farms Limited, Mr Babatunde Ogunyemi, in his lecture, “The dynamics of channeling. New course for Yoruba entrepreneurship”, noted that with the teeming population in the region, there is need to go back to farm.

He also lamented the dearth of skilled manpower in the region, saying the attention that has shifted to Okada business is more of a curse than a blessing to the region.
Ogunyemi, a banker, who returned from the United Kingdom (UK) to embrace farming, said he never regretted the decision. He said that the region was blessed with arable land and favourable weather condition to match, apart from other mineral resources it is blessed with.

He then added that Agriculture as a profession is not for the poor again, a reason, he said has consistently discouraged youths from pursuing a career in the farm. He however advised that with the current situation in food production in the world, no community is food sufficient, hence, a reason which makes all agriculture produce disappear in the market.

“I am using 150 acres of land for farming and I have been supplying my produce to corporate bodies and multinationals. Okada business in the region’s business sphere has eroded the interest and commitment of the youths to agriculture because it is no more enterprising to them,’’ he said.

The Ijebu-born farmer said that there was no community in the country that is food sufficient, urging the people to go back to the farms for guaranteed food security and improved living standard.

Ogunyemi said that the demand for the local `Ewedu’ and `Soko’ vegetables in the UK cannot be met, saying the local vegetables now has high foreign value.
“Today, we export four tonnes of `Ewedu’ to Europe on a weekly basis. When you plant vegetable, it grows in 45 days and N1000 seeds of vegetable can plant an acre of farmland. It is good to note that vegetables harvested from an acre of land have a foreign value of £2,300 when exported,’’ he said.

He advocated the establishment of the King’s farm (Oko Oba) in Ibadan, saying he would be willing to give necessary support as a motivation to the subjects to return to their farmlands.
The event was attended by Deputy Governor, Central Bank of Nigeria, Mr Adebayo Adelabu, Asiwaju of Ibadanland, Chief Akinade Fijabi, Asiwaju, and a host of others.