Buhari to security chiefs: Your best is not good enough

•President’s dissatisfaction with us a call to sit up ― NSA 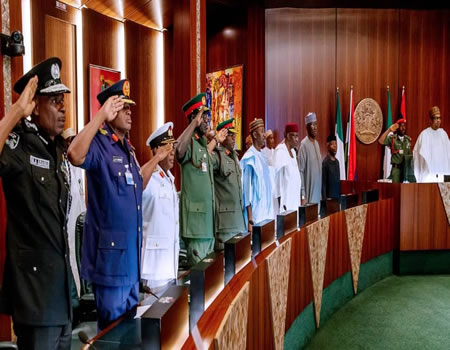 Worried by the worsening insecurity in the country, President Muhammadu Buhari has told heads of security agencies that they are not doing enough, saying that he will no longer accept an escalation in the situation.

Briefing State House correspondents at the end of a meeting between security chiefs and the President at the Presidential Villa, Abuja on Thursday, the National Security Adviser (NSA), Major General Babagana Monguno (rtd), who revealed this, said the President was extremely unhappy and wanted a reversal in the deteriorating security situation.

The NSA said the President told the security chiefs that they were not imposed on him, saying that it was therefore up to them to justify the efforts of the administration.

Monguno, who was flanked during the briefing by, AVM Mohammed Sani Usman, Director of Defence Intelligence (DDI) and Alhaji Yusuf Magaji Bichi, Director-General of the Department of State Security (DSS), stated: “A meeting was just concluded between Mr President and heads of the security agencies, that is the operational heads consisting Minister of Defence, the service chiefs and on the other hand, the intelligence components that is consisting of myself and the intelligence heads.

“Mr President also told us clearly in no uncertain terms, that he and indeed the administration campaigned to power on the platform of three issues: fighting insecurity, overcoming our economic difficulties and dealing with the scourge of corruption.

“More so, he noted that it takes common sense for anyone to understand that without security, the pursuit of the other two will just be an exercise in futility.

“He also stated, that no one was forced on him, he selected everyone individually based on what he feels their records had revealed and therefore, it is up to the individual organisations to live up to the expectations.

“Again, Mr President has also said that it is extremely important that we in the security agencies, must ensure that we justify the leadership by not disappointing the populace.

“He also pointed out the immediate areas of concern and these areas are also interlinked and we must find a way out, especially the issue of proliferation of drugs, small arms and light weapons.

“These two issues also go hand in hand with the major issues of criminality in this country, be they banditry on one hand in the north-west of Nigeria or terrorism in the North-East.”

The NSA, who also said that the issue of unregistered SIM cards has become a concern to the government, as well as the lack of synergy among the security agencies, pointed out that the president’s dissatisfaction with the security heads was a call for them to sit up.

He added: “Now, added to this, is also another area which rises concern, is the use of unregistered SIM cards.

“In my own brief, I dwelt on that issue and I raised concern that whatever we intend to achieve, we will not be able to get to the promised land unless we wrestle this issue of unrestrained acquisition of unregistered SIM cards.

“Mr President has directed that I, as the National Security Adviser should link up with the honourable minister of Communications and Digital Economy, to work out a blueprint to ensure the end of the irresponsible use of any SIM card.

“Of course, I urged my colleagues the Inspector General of Police and Director-General of the Department of State Services to help in this issue.

“Again, my office is going to call on, certain governors starting with the governors of the north-west zone including the governor of Niger State, to come over into Abuja so that I meet with them and my colleagues in intelligence and security.

“Finally, is about the issue of lack of synergy within the security sector. This has to be addressed also and has left us in no doubt that unless we address this issue and form a single front, the convergence of efforts, the confluence of all ideas be they operational or intelligence, must be achieved so that we no longer if at all there was this notion that groups were working in silos or stockpiling, they desist from that with immediate effect.

“We must have a central platform to coordinate all the efforts, all operations and security.

“In the final analysis, Mr President has said everyone is doing his best, but his best is not good enough. That should send a signal to all of us.

“But again, it is also incumbent on the wider Nigerian population to key into whatever the security agencies are doing.

“Understanding that there has been the issue of loss of confidence, loss of trust, abuse or whatever, these issues will have to be addressed by and discussed between security agencies and the political leadership, and of course the judiciary will come in.

“I, the National Security Adviser, wants to reassure Nigerians that each and every department or agency or component, will redouble its efforts and ensure that we reverse our dwindling fortunes for the betterment of this country in the remaining period they have in the lifetime of this administration.”

On what they have to do to reassure the public, Monguno stated that they will to return to the drawing board.

He opined: “First, we have to go back to the drawing board, nothing is ever too late. It’s regrettable that lives have been lost, a lot of chaos has arisen, but that doesn’t mean we ditched all our efforts.

“We are going to go back and that is why I emphasized on collective efforts; the convergence of all our efforts so that we can streamline and develop more meaningful strategies, but definitely there will be a change.”

On the possibility of a re-jigging of the security apparatus, he said: “These are issues that only the President can address. I’m just an adviser. It’s up to Mr President.

“He has the prerogative to make any change at whatever time he deems fit.

“Remember he’s the Commander-in-Chief of the Armed Forces and he’s the one ultimately who will take this kind of executive decision.”

Also speaking on the lack of coordination among the services, the NSA explained: “There’s a lot of flexibilities, a lot of issues of overlapping and interlocking responsibilities.

“For the office of the National Security Adviser, its mandate remains the same as before.

“This again is a decision that only the President can streamline because as the Commander-in-Chief of the Armed Forces, he may deem it necessary to allocate certain tasks and responsibilities to certain organisations, even outside defence and security.

“So, he’s going to look up whatever is going to be presented to him by way of collective efforts.

“I know that the Honourable Minister of Defence is already reviewing the policy, Intelligence is also reviewing certain aspects and I think it’s the final document that Mr President will look at in determining what role should be played by what organisation, what department, what agency.”

Craps is The Online Gambling Game You Need to Learn Better