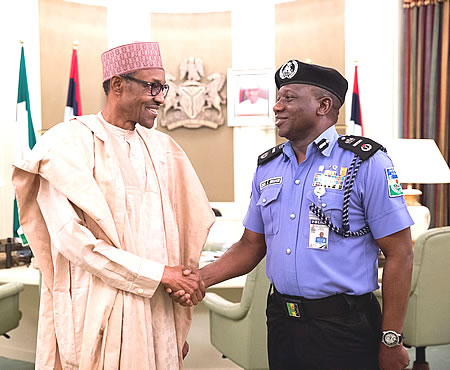 The new police boss was decorated on his visit to the presidential villa, Abuja on Tuesday.

Idris, who  hails from Niger State (North-Central),  was until  his appointment AIG  in charge of Federal Operations, Force Headquarters.

He  holds an LLB (Honours) in Law from the University of Maiduguri, and was  enlisted into the Nigeria Police Force as a cadet  assistant supritendent of police  (ASP) in 1984.

Speaking to State House correspondents after meeting with the President, Idris assured the audience of collective leadership, stating that the Nigerian police, was going to be governed by internationally recognised core values applicable to policing  everywhere in the world.

He said: “this is  issue of integrity, accountability, compassion, respect for diversity and ensuring that our  communities remain safe.

“We are going to do everything possible to ensure that we provide the best service to this  country”.

Outgoing Inspector General of Police, Solomon Arase who accompanied his successor to the villa, appealed to Nigerians to give the acting (AIGP), the same cooperation he enjoyed while in the saddle, saying he is fully equipped with modern techniques of policing.

He said, “I want to formally introduce my successor, AIG Idris Kpotum, he is going to be in acting capacity until the Police Council confirmed the appointment. Arase thanked Nigerians for the cooperation given him while he served as Inspector General of Police,

Acting IGP Idris, was in the United Nations  peace keeping centre in New York for over 10 years.

The president thanked the outgoing IGP for a job well done. Arase, who was appointed IG by former President Goodluck Jonathan in April 2015, will attain the mandatory retirement age of 60 on June 21.

He has served 35 years in the Nigeria Police Force.

News Agency of Nigeria (NAN) reported the breaking of fast with the service chiefs and IG Arase was the first official assignment of President Buhari, after his resumption of work on Monday.