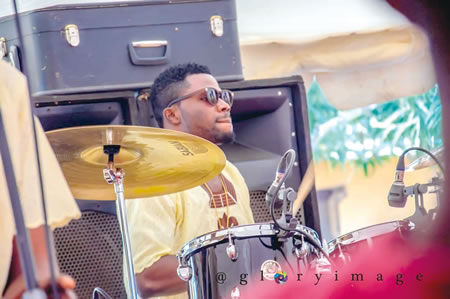 Drummer, Abidemi Adetunji, otherwise known as Bdotsticks, has revealed his plans to commence an online drum training that would encourage young Nigerians to follow their passion in drum playing.

Regarded as one of the most patronised drummers in the South-West Nigeria, Bdot said his passion for drums started when he was a child as he would pick up sticks from anywhere to play drums, adding that he had always known that he would make a living out of it.

Having gone on tours within and outside the country over the years, he disclosed that it was high time that people benefited from his drumming skills, hence his resolve to start an online drum class that would afford many people to watch him play drums and learn.

He said the session would go live on YouTube as he urged his fans to subscribe to his YouTube channel to have a full access to the training that would involve Juju gospel drumming, Fuji drumming in a classical and contemporary style.

“ I think this is the best time to give back to the people and teach them what they would have paid to get. It is going to be about drum training as they would also have access to some of my studio recordings and stage performances. I will be going live for the drum training so people should subscribe to my YoTube channel,” he said.

I have no one to help me, even my parents are penniless —Visually-impaired gospel musician