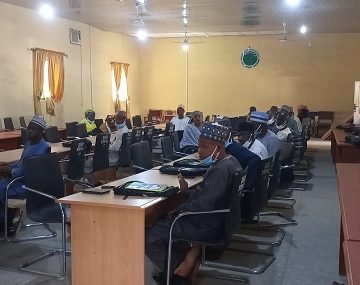 Bauchi State Government has released the sum of N300m to the State Agricultural Supply Company (BASAC) as a revolving scheme on fertiliser blending and distribution to farmers in the state.

The disclosure was made by the State Commissioner of Agriculture and Rural Development, Pharmacist Samaila Adamu Burga, who said that the scheme is aimed at eliminating all hindrances to the availability of the commodity to peasant farmers across the state.

The Commissioner who was speaking while declaring opened a 5-day training workshop for staff of the BASAC organized in conjunction with Namus Agric Consult Nigeria Ltd, on Wednesday, said that the Company was established in 1981 by the government in order to provide succour to the plight of farmers every year.

He said that “The company is to ensure that the farmers got quality farm inputs in order to boost production. Over the years, the company has done well as can be seen in the produce of our farmers yearly.”

Samaila Adamu Burga said that “in order to ensure that the farmers got fertilizer without hitches, the government has released the sum of N300m to BASAC as a revolving scheme to procure the commodity from the blending company, sell it to the farmers and go for another round of supply, with that, there will be no break in supply of the commodity.”

He then urged the participants to pay attention to the training in order to be able to serve the people better because according to him, effective service delivery will attract patronage from the farmers.

Earlier on, the General Manager of BASAC, Engineer Ishaq Isah said that the company is involved in ensuring that farmers in the state got quality service in order to boost produce production.

He also said that, for effective service delivery, the company has three Zonal offices and sales outlets across the state where its services can be accessed by the farmers especially the peasants who do not have the financial backing to make purchases.

The BASAC GM commended the state government for supporting the company in its determination to improve the agricultural production in the state saying that people of the state are collaborating with the company to boost their businesses.

In spite of the huge investment in the water sector by the government and international organisations, water scarcity has grown to become a perennial nightmare for residents of Abeokuta, the Ogun State capital. This report x-rays the lives and experiences of residents in getting clean, potable and affordable water amidst the surge of COVID-19 cases in the state.  Bauchi govt  commits N300m to fertiliser revolving scheme to boost agric production