Bauchi governor’s security vehicle somersaults while attempting to overtake others 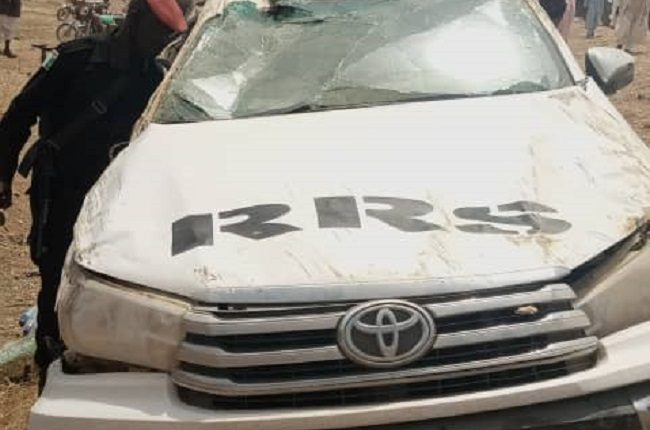 Share
One of the vehicles conveying 10 Police personnel of the Rapid Response Squad (RRS) providing security cover for Bauchi State Governor, Sen Bala Mohammed, was involved in an accident on Tuesday while it attempted to overtake other vehicles on the road.
The vehicle, a Toyota Hilux pick-up van, RRS 3 lost control and somersaulted after dust raised by the rest of the governor’s convoy covered its line of sight on the road which is currently under construction.
The vehicle, driven by one Sabo, was in the process of overtaking other vehicles in order to join the rest of the convoy when it lost control and skidded off the road.
The governor was on an inspection tour of ongoing projects across the state including 62km Burga-Yelwan Duguri-Alkaleri road project to ascertain its level of completion when the incident happened.
Though there was no loss of lives in the accident some of the personnel were injured. One of them was said to be unconscious and they were all rushed to the nearby hospital in Bununu, the Tafawa Balewa local government headquarters. Those badly injured were later referred to Bauchi for more medical attention.
The governor’s vehicle and those of some top government officials had gone far off when the incident happened. But other vehicles including that conveying journalists, commissioners of information, works and transport stopped and participated in the rescue operation of the victims.

The Lagos-Ibadan railway was inaugurated recently for a full paid operation by the Nigerian Railway Corporation after about a year of free test-run. Our reporter joined the train to and fro Lagos from Ibadan and tells his experience in this report… | Bauchi governor’s security vehicle  |