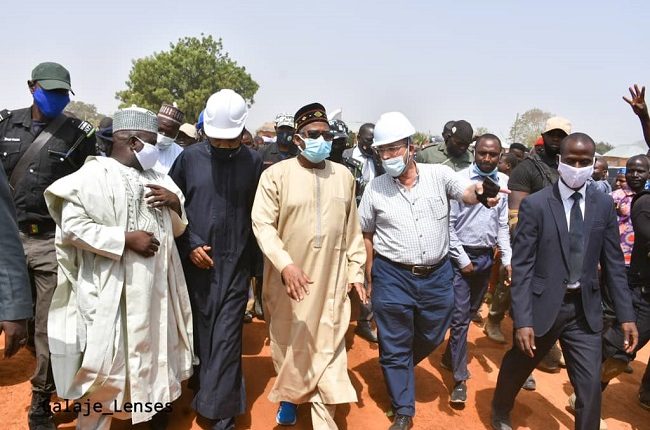 As the political infighting between Bauchi State Governor, Sen Bala Mohammed Abdulkadir, and former Speaker of the House of Reps, Barrister Yakubu Dogara, rages on, the state has called on the people, particularly those from the Dass/Bogoro /Tafawa Balewa Federal Constituency, not to allow opportunistic politicians to divide them because of religion and tribe.

The Governor who was speaking while on projects inspection in Tafawa Balewa and Bogoro LGAs, on Monday, said that “you people should know that we are one. We all belong to the minority tribe in the state, we must therefore be united to achieve development.”

Bala Mohammed was in Bogoro Local Government Area to inspect the level of progress of the Boi-Tapshim and Malar – Lussa – Bogoro road projects in the state assuring that his administration is working on opening up the entire state.

The Governor said that he embarked on the inspection tour across the state in order to deepen monitoring and evaluation as well as ensuring that there was value for money insisting that projects must be executed to specifications.

He also said that his administration is taking responsibility for the trust bestowed on the government by the people of the state to ensure that there was no element of diversion of public funds to private pockets while quality control must be enforced.

The Governor said that “When I was in Tapshin during the electioneering, I was told that there was no single government project in there. It is a very big town and the people have been contributing positively to the growth and development of Bauchi State in terms of human capital and the people, yet they are marginaliSed by the majority of people of Bauchi State so that I felt, I should do this project to show the inclusion, to respect them and appreciate the votes they gave to the PDP.”

He added: “We always say that politics is a reward system and we must always try to bring inclusion. This road is to the glory of God and to the benefit of the people of Bauchi State because Tapshin is going to be opened up and by the grace of God, when you give me the opportunity to come for the second term, I will take the road again. Our duty is to improve the quality of lives of our people and connect communities, this road will connect communities.”

In his address, the State Commissioner of Works and Transport, Abdulkadir Ibrahim, said that the Boi- Tapshin road is 11.6 kilometres with bridges, culverts and drainages, adding that the road was awarded last two months, worth the sum of N2.9 billion.

The Commissioner assured that all the ongoing projects are being handled by competent contractors who have been tested with such projects across the country and will deliver quality project which will stand the test of time.

Bauchi governor’s security vehicle somersaults while attempting to overtake others