•Says No friendship in business execution 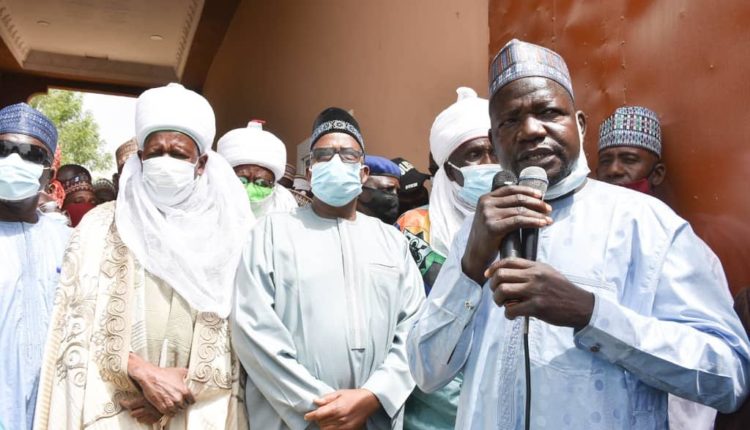 Contractor handling the over N75m reconstruction project of the Palace of the District head of Katagum in Zaki LGA of Bauchi State has incurred wrath of the State Governor, Sen Bala Mohammed Abdulkadir who revoked the contract with immediate effect.

The Governor who is on inspection tour of ongoing projects across the state, expressed his sadness over the slow pace of the reconstruction of the Palace of the District Head of Katagum, Usman Mahmood when he visited on Saturday.

The contract was awarded at the cost of over  N75 million and was supposed to have been completed and commissioned within the first 100 days in office of the Governor in 2019 but work is still in progress at a slow pace more than one year when it was due for completion.

The Governor expressed dismay with the slow pace of work which he gave to of his friends who is one of the leaders of his political party, the Peoples Democratic Party in state declaring that there is no friendship in project execution with people’s money.

Bala Mohammed said that, “This Palace is the first contract we awarded when we came into power and we have the contract because of the respect we have for this family and the Palace. This District Head among his colleagues in the state, besides being my elder brother, we have a strong cordial relationship and this town is the root of Katagum Emirate.”

He added that, “We give the people’s money for the construction of roads, schools, hospitals, Palaces, among others and we decided to embark on this inspection tour to see the level of work done.”

An enraged Governor said that, “Since I started this inspection, I have inspected roads and other projects and I was impressed and satisfied but for this reconstruction of the Palace, I am not happy. The contractor has failed us and he is our leader in the party.”

Bala Mohammed added that: “I told the PDP Chairman that I am not happy with this project. We gave money for this project 100 percent so that this work can be completed and he increased the contract amount and we paid him but unfortunately, this hasn’t been completed.”

According to him, because of the slow pace of work, the District Head was forced to use his personal money to complete a section of the Palace so he can stay in stressing that the contractor has done injustice to us.

The governor said: “Relationship and friendship are different, official work is different, politics is also different. I revoke this contract and we will give it to someone who would complete it. We will not waste government money at our disposal.”

He added that, “Before now, the District Head has been complaining about this work and I am not happy at all. The contractor is a man of honour to us, a leader in our party and because of that, I won’t call his name but he knows what he has done to us.”

The Governor then directed the Commissioner of Local Government and Chieftaincy Affairs, Abdulrazak Zaki, to immediately source for another contractor resident in the area to handle the project.

The District Head, Usman Mahmood, in a response, expressed gratitude to the governor for his urgent intervention which will see to the completion of the project within a short period of time.

He pledged the loyalty of his subjects to the administration calling however for more dividends of democracy in the area just as he appealed for more security attention considering the nature of the area.