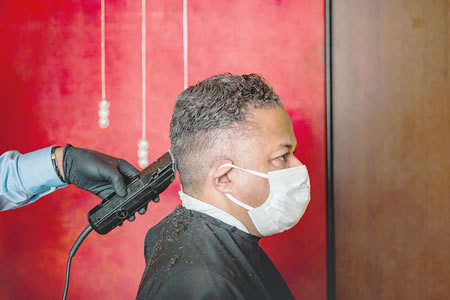 Following the news that about 50 percent of COVID-19 infections in the US were contracted from barbing salons, I am afraid of going to the barber to cut my hair. I will appreciate it if you can advise me on what to do

COVID-19 has presented new risks for every profession. In the case of hairstylists and barbers, the risks have been heightened because of the lack of social and physical distancing that usually occurs in barbers’ shops. In addition, the use of communal instruments such as the barber’s chairs, clippers, shavers, towels, aprons not to talk of the air in the barber’s shop have all contributed to the fear of the spread of the virus. To avoid any of these possibilities, some people avoid cutting their hair in barber’s shop and instead, invite the barbers to their homes. Others have purchased their own set of barbing clippers and aprons which they take along to the barber’s shop. Most salons and barbershops already do a good job wiping down equipment and maintaining proper sanitation. But with COVID-19, these efforts should be increased. Sterilize tools and ensure stations are wiped down in between each client. A deep cleaning should be done at least once a week. The use of disposal aprons, tissues and towels, face masks and gloves should also be encouraged.  Unnecessary frequently touched surfaces such as magazines are commonplace in a salon for customers to flip through while they wait or during their service. With the risk of COVID-19, these should be removed from salons. Safe hand washing and hand sanitizing should be encouraged. Customers should be asked to wash their hands or use hand sanitizer upon entering the salon. Employees should also wash their hands in between all clients.