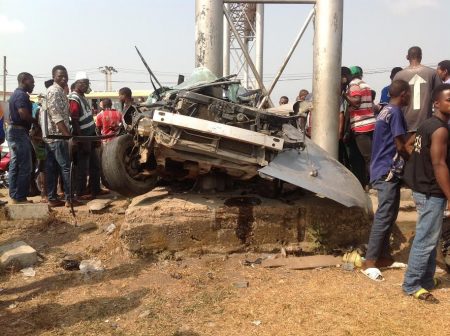 A lone accident claimed the lives of two of the four occupants of a vehicle along MKO Abiola road, formerly Ring Road, Ibadan, the Oyo State capital, on Wednesday.

The accident, which occurred at about 2.00 a.m., involved a silver Nissan TEANA car with a foreign registration number DUBAI EXP 20719.

Metro gathered the occupants were returning from a night club in the early hours of the day when the incident happened.

Nobody could ascertain the exact cause of the accident, but some people who claimed to have heard from some security guards around the area at the time of the incident claimed that it was a lone accident.

They further informed that the car was occupied by four youth who were coming from one of the clubs around Olusanya area also on the MKO Abiola Road.

The car rammed into one of the poles holding an advertising board at Mobil bus stop, just before Town Planning bus stop.

Though, some eyewitnesses told Metro that all four occupants of the car died, the Oyo State Police Command said only two of the occupants died, while the remaining two were injured.

When Metro visited the scene of the accident, the seats of the car and other interior gadgets were smeared with blood, while the car was completely destroyed.

According to Ajisebutu, “It was a lone fatal motor accident. Two persons died, and two others were injured. Corpses of the deceased have been deposited at the Adeoyo Hospital for autopsy, while the injured victims have been taken to Oluyoro hospital for medical attention.”

He added that the “victims’ relations have been contacted, while the vehicle had been taken to the police station for necessary action.”