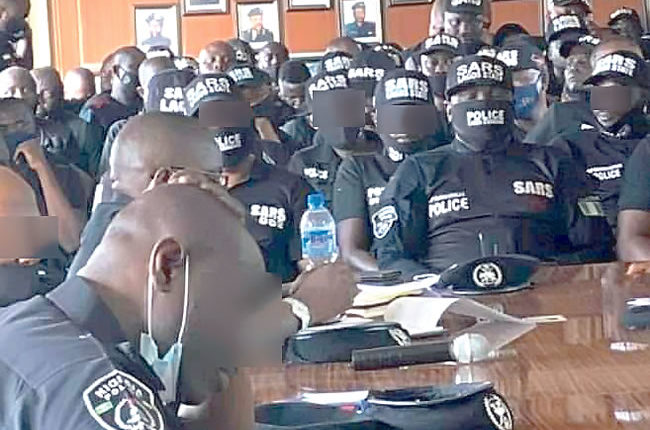 The All Progressives Congress has commended the Inspector General of Police, Adamu Mohammed over the dissolution of the Special Anti Robbery Squad (SARS).

The party in a statement at the weekend described the IGP’s pronouncement decision sequel to public outcry as responsive decision, “a major and concrete step towards President Muhammadu Buhari affirmed resolve to achieve better policing and necessary reforms.”

The statement signed by deputy national publicity secretary of the party, Yekini Nabena further urged the Police to “balance the need to effectively combat armed robbery, kidnapping and other violent crimes in the country and ensure humane, professional and accountable police operations.”

It read in part: “The All Progressives Congress (APC) welcomes the disbandment of the Special Anti Robbery Squad (SARS) and views the responsive decision as a major and concrete step towards President Muhammadu Buhari affirmed resolve to achieve better policing and necessary reforms.

“From the recent #BlackLivesMatter social movement to other global clamours for review of Police operations particularly in regard to citizens they are empowered to protect, the need for Police reforms in Nigeria is urgent and continuous.

“With benefit of experience and public outcry over the operations of the now disbanded SARS, the APC is confident that the new policing arrangement promised by the Inspector-General of Police, Adamu Mohammed will balance the need to effectively combat armed robbery, kidnapping and other violent crimes in the country and ensure humane, professional and accountable police operations.

“We call on Nigerians to take advantage of the Citizens’ and Strategic Stakeholders’ Forum which is being formed to regularly interface with Police leadership at all levels and advise on police activities as they affect the general public.”