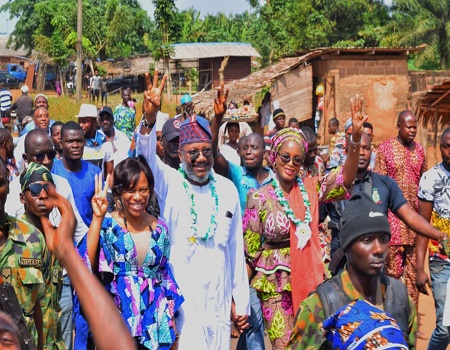 The governorship candidate of the Allied Peoples Movement (APM) during the last general election in Ogun State, Hon. Adekunle Akinlade has described as unprecedented the legacies left behind by the immediate past Governor of the state, Senator Ibikunle Amosun.

Akinlade stated this on Tuesday, in his country home, Agosasa, in Ipokia local government area of the state, during a welcome party organised for him by a social group, Ipokia Pioneers.

Recall that Akinlade, who contested the governorship seat with Abiodun, under the platform of the APM, returned to the ruling All Progressives Congress (APC) last week.

While speaking during the reception, Akinlade, expressed confidence that he, added will still be Governor in Ogun state.

“I want to appreciate Sen. Ibikunle Amosun for standing by us. It is rare to have a leader like him, who stood by us in the manner at which he stood by us against all odds.

“Just like we can all see across Ogun State and I make bold to say, just like President Buhari once said that, Sen. Ibikunle Amosun’s legacies in Ogun can never be wiped out, except there is an earthquake and God will not allow that.

While commenting on the party structure in the state, Akinlade emphasised that after the reinstatement of Senator Amosun, the suspension of party executives in the state will be lifted soon.

“Just like the suspension of our leader, Senator Ibikunle Amosun, was lifted, that of all party executives in the state will be lifted soon.”

In their separate remarks, the Chairman of Ipokia Pioneers, Alh. Ashirudeen Maliki and a leader, Alhaji Segun Adeosun, appreciated the people of Ipokia and Ogun state for their unflinching supports for Akinlade.

They added that the people of Ipokia local government and Ogun West would stand by Akinlade until his dream is actualised.

“Akinlade is our son and he deserves our support. We are going to stand by him and support him until he actualises his dream,” they affirmed.